Posters for election candidates remain up after deadline 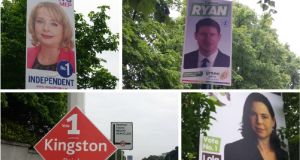 Some of the election posters that remain up in Dublin this morning. Clockwise from top left, Nessa Childers, Eamon Ryan, Deirdre Kingston and Lola Hynes. Photographs: Kitty Holland 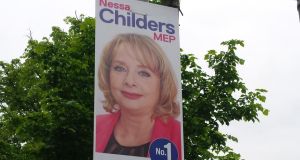 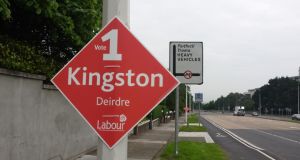 An election poster for Labour Party candidate Deirdre Kingston on the N11 in Dublin this morning. Photograph: Kitty Holland 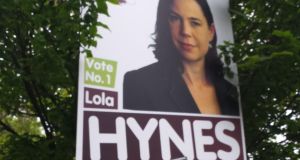 An election poster for People Before Profit candidate Lola Hynes on Merrion Row in Dublin this morning. Photograph: Kitty Holland 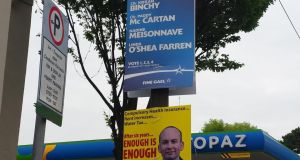 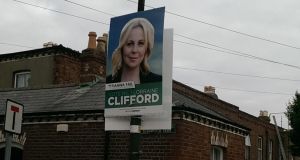 Almost all political parties, and some Independents, still had election posters up across parts of Dublin city this morning, despite the passing of a midnight deadline for their removal.

According to local authority regulations, any party or candidate who had failed to take down their election materials by midnight is liable for a fine of €150 per poster.

The local authorities are responsible for issuing the fines.

It appeared to be the only party which had no posters still up this morning during a brief tour of parts of Dublin 4, 6, 6W, 8 and some adjoining areas by The Irish Times.

Independent MEP Nessa Childers, Socialist Party candidate for Europe Paul Murphy and Fine Gael are potentially facing fines with many of their posters still up this morning.

There were two Brian Hayes (FG) posters still up on Marlborough Road with plenty of other posters still asking a weary electorate to vote for their City Council candidates.

Ms Childers’s confident face could still be seen in Ranelagh, Donnybrook, Ballsbridge, out along the Rock Road and on Mount Merrion Avenue.

Mr Murphy - who also potentially faces fines for having put up his posters too early - is also ubiquitously still asking Labour to “axe the [WATER]tax or watch your vote collapse”.

One surprising appearance was that of Eamon Ryan, unsuccessful Green Party candidate for Europe, who now faces a possible littering fine for at least one poster, still up this morning on Herbert Park.

Fianna Fail’s Lorraine Clifford still had posters up on Merrion Road and in Portobello, while one of the Labour Party’s successful local election candidates, Mary Freehill, still had a poster up at Harold’s Cross bridge.

Labour’s Deirdre Kingston still had three posters up along one section of the N11, while Lola Hynes, People Before Profit candidate for Dun Laoighaire/Rathdown County Council still had a poster up on Mount Merrion Avenue, where she kept company with Barry Ward of Fine Gael and Ms Childers.

Separately South Dublin County Council confirmed it had issued fines to three parties and/or candidates for erecting posters before it was legally allowed - 23rd April.

The council was not immediately able to say who was fined.

Covid-19 cases could hit ‘explosive level’ again, says HSE chief 16:52
Almost 400,000 fewer people scanned for cancers last year 16:41
Photographic record of Covid-dominated year to be prepared by press photographers 16:27
Dáil told of childcare provider’s staff who got jab ahead of time 16:26
Gulf Stream lifeline at its weakest in more than a millennium 16:01