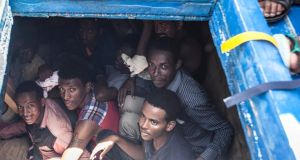 Migrants inside the hull of their wooden boat off the coast of Libya: Medecins sans Frontieres (MSF) and Moas (Migrant Offshore Aid Station) rescued 561 migrants on Thursday May 14th. Photograph: Jason Florio/Moas/Reuters

More than half the electorate is opposed to allowing migrants fleeing north Africa to settle in this country, according to the latest Irish Times/Ipsos MRBI poll.

Asked if Ireland should offer to resettle migrants as part of an EU response to the problem in the Mediterranean 52 per cent of voters said Ireland should not offer while 48 per cent said we should.

Fine Gael supporters were strongest in support of offering to settle migrants with 61 per cent of them in favour while Sinn Féin voters were most strongly opposed with more than 70 per cent against the move.

There are also wide differences in attitude across the social classes with 66 per cent of the best-off AB voters in favour of accepting migrants while poorer C2 and DE are most strongly opposed.

In regional terms Dublin is the most favourably disposed, followed by Connacht-Ulster and Munster, with voters in the rest of Leinster being the most hostile. Across the age groups the youngest, 18-24 , cohort is most strongly in favour but the next age group, those from 25-34, are the most strongly against.

There is no significant urban-rural divide on the issue.

As to how many migrants should be taken in as part of any EU quota system, the majority of people believe it should be no more than 1,000.

This actually tallies with the proposed system under which Ireland will be expected to take in about 300 asylum seekers if the European Commission plan to deal with the issue is accepted by the member states.

There was not a huge variation across the parties on the number that should be admitted with broad agreement on up to 500 being the most acceptable figure.

In class terms the poorer groups and farmers were more inclined to go for a lower figure while better off and younger voters opted for a higher number.