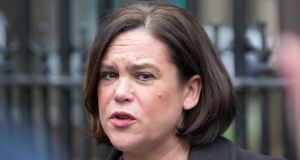 Deputy Sinn Féin leader Mary Lou McDonald. She said there is no entitlement for TDs, Senators or MEPs to take time off when they have a child. Photograph: Gareth Chaney Collins

Ms McDonald said there is no entitlement for TDs, Senators or MEPs to take time off when they have a child.

She said: “We need to table it as a really serious matter of discussion and not on the abstract, people get very disillusioned about that.

“We should discuss these things.”

TDs, Senators and MEPs have no right to parental leave and a Bill proposed by Fianna Fáil in 2013 was rejected by the Government.

Ms McDonald said no public representative could take a year off after having a child insisting the electorate would not look favourably on that.

She said: “That is just a hard-nosed political reality. I think we need to have a discussion with the public on that .

“I think anybody in politics would tell you that if you were to choose to take parental leave for a year in this job you would find yourself in some difficulty.”

Ms McDonald said TDs are considered self-employed and therefore it is a matter for themselves how long they take off.

She said: “I think it is most unfortunate even if it was just to have it written down somewhere in a protocol a recognition that women who participate in political life and women of child-bearing age might in fact have a child.”

Ms McDonald was speaking as she launched the party’s policy on childcare.