Claims will be ‘dealt with in the courts’, says Commissioner 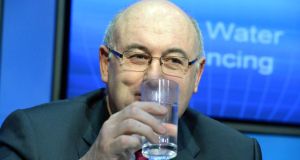 EU Commissioner for Agriculture Phil Hogan has said Independent MEP Nessa Childers’s claims about his suitability for the post are “absolute rubbish” and they will be “dealt with in the courts”.

Ms Childers wrote to members of the Socialists and Democrats Group in the European Parliament last week, raising “serious reservations”. She alleged Mr Hogan’s involvement in a dispute over accommodation for a Traveller family in Kilkenny meant his appointment would be “a step backwards for equality”.

Mr Hogan also dismissed as “absolute rubbish” and a “silly season story” an item on RTÉ Radio’s This Week programme that showed Mr Hogan signed off on a budget for Irish Water’s establishment costs.

Asked by Sean O’Rourke if he had hidden the extent of his detailed knowledge, Mr Hogan said no. “I certainly indicated that there was an overall figure required to establish a new company,” he added.

Mr Hogan said he would be a Commissioner for the entire EU and said he had been pleased with the reception he had received to date.

“We will have a little bit of rattling the cage for domestic political purposes in Ireland but it’s interesting that the Democratic Unionist Party and the Ulster Unionist Party are supporting my nomination and Sinn Féin are not. So that gives another definition of green jersey I suppose.”

Mr Hogan said Taoiseach Enda Kenny had played a very important role in ensuring Ireland secured the Agriculture portfolio. “His relationship with (European Commission) President (Jean-Claude) Junker has come into play in a major way for a small country like Ireland.”

Mr Hogan added: “It’s a great moment for me personally.” He said he had a track record of delivering for his constituents and his country.

The new Commission would focus on challenges around the delivery of jobs, growth and investment.

He said food security would be a key issue in his portfolio. He would look at ways to help farmers in the eastern part of the EU who were affected by the Ukrainian and Russian crises.