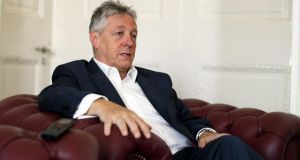 Northern Ireland First Minister Peter Robinson has called the decision by the Ulster Unionist Party (UUP) to leave the Northern Ireland Executive dishonest, saying “exiting the field of play” was not a tactically clever first option.

First Minister Peter Robinson is to meet the British prime minister David Cameron on Tuesday to discuss the crisis caused by the PSNI assessment that IRA members were involved in the recent murder of a Belfast republican, and that the IRA still exists.

Mr Robinson has also rounded on the Ulster Unionist Party for deciding to withdraw its single Minister, Danny Kennedy, from the Northern Executive.

“This is not the time to flee the battlefield, it is the time to confront violent republicanism, to stand and fight for democratic principles and to do what is right for the law-abiding citizens of Northern Ireland who want to see our country prosper and reach its full potential,” said Mr Robinson.

“Now is a time for cool heads, clear thinking and a steely resolve to ensure that democracy and the rule of law triumph over terror and murder.”

In response, the UUP leader Mike Nesbitt said it was “remarkable” that Mr Robinson “cannot agree with me that enough is enough and take a principled stand”.

While Mr Nesbitt’s decision to quit the Executive has put considerable pressure on the DUP to do the same, Mr Robinson indicated he still saw some possibility of the situation being retrieved.

“Whatever we do we must not allow republicans who precipitated the crisis to end up benefitting from it. It should be republicans and not unionists who pay the price for the misbehaviour of the IRA,” he said in an article in today’s Belfast Telegraph. “Playing party politics in these highly dangerous circumstances is irresponsible. Doing it in a ham-fisted manner is both irresponsible and illogical.”

Mr Robinson said he will meet Mr Cameron on Tuesday “to discuss how these issues can be resolved and to seek his assistance in doing so”.

He said he will also hold discussions with the Irish Government and the other Northern parties.

The DUP leader was fiercely critical of Mr Nesbitt’s decision, which he said was motivated by party political interests, rather than the interests of the people of Northern Ireland.

“Exiting the field of play is not a tactically clever first option. It can only ever be a last resort. Punishing your own community for the wrongs of others and rendering yourself irrelevant is hardly a brave, bold or sound strategy,” he said. “Having fled dramatically, the Ulster Unionist Party has taken the pressure off republicans. Now they have marginalised themselves, what do they do for an encore?

“The decision of the Ulster Unionist Party to leave the Executive nine months before the next scheduled election is not one of principle, but of political expediency. One would have more respect for the decision if there were even a degree of honesty about the motivation behind it.”

Mr Robinson said that in the coming period it would “not be business as usual at Stormont”. He said he entirely accepted the PSNI chief constable George Hamilton’s assessment that IRA members killed Mr McGuigan and that “some IRA structures remain in place over a decade after it was said that they had left the stage”.

“Seven years after the Independent Monitoring Commission report stated that the PIRA Army Council was ‘no longer operational or functional,’ we should not be debating its existence.”

He said that regardless of whether the murder of Mr McGuigan was approved by the IRA leadership, “this kind of activity is unacceptable and inconsistent with membership of the Executive”.

“In the coming days we will hold fast to the fundamental principle that those who are in government in Northern Ireland cannot also be involved with those who engage in paramilitary and criminal activity,” he added.

Mr Robinson did not specify how the problems might be surmounted, but said that “mechanisms need to be in place, not alone to punish, but to discourage such behaviour in the future and remove it from our society”.

The DUP leader, while indicating the possibility of safeguarding the Executive and Assembly was adamant that the situation remains grave. “Northern Ireland is facing a moment of truth that will determine our direction for years to come,” he said.

The UUP leader Mr Nesbitt said it was “extraordinary that it has taken until the last day of August” for Mr Robinson to comment on the latest IRA murder.

“The Ulster Unionist Party will put country ahead of selfish party interests and do what’s right for Northern Ireland. We will not be deflected by ill-thought out soundbites from the leader of the DUP,” he said.

1 Man unidentified in psychiatric hospital for 30 years may have DNA taken
2 Covid-19: One death and 363 further cases confirmed in State
3 ‘Insane’ gathering of hundreds of students in Galway condemned
4 US election: Everything you need to know about Tuesday’s presidential debate
5 Ireland will not be Brexit ‘collateral damage’, says Coveney in Washington
Real news has value SUBSCRIBE