Peter Fitzpatrick TD may run under different banner in election 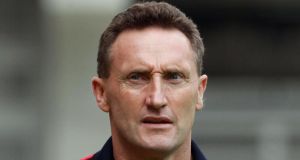 Fine Gael TD Peter Fitzpatrick has hinted he may contest the next general election under a different political banner.

The Louth deputy and former county football manager confirmed last week he would not seek the nomination of Fine Gael party members in the constituency.

However, he told The Irish Times on Tuesday he had not ruled out running in the general election.

“I’ve options both inside and outside politics, and I’m keeping my options open,” Mr Fitzpatrick said.

He declined to say whether he had been approached by another party or had been encouraged to contest as an Independent.

Elected in 2011, Mr Fitzpatrick, from Dundalk, was manager of the Louth senior football team, the Leinster finalists of 2010.

In a statement released last week, he said: “The last four and a half years have been both enjoyable and rewarding working on behalf of my constituents, and I am looking forward to continuing my work in Dáil Éireann over the coming months.”