Concern that committee is acting outside its remit 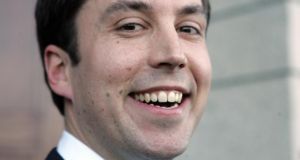 Fine Gael Dublin South-East TD and PAC member Eoghan Murphy said he i was “concerned that we have already overstepped the mark” on the penalty points issue.

A rift has emerged within the Public Accounts Committee (PAC) over whether it should hear evidence from a Garda whistleblower on the penalty points controversy.

A number of TDs on the committee are now concerned they are acting outside their remit as they investigate alleged irregularities in the cancellation of penalty points.

A senior garda also visited the PAC offices yesterday to examine files given to the committee by one whistleblower, but left them in the possession of the committee.

The committee has already been given a warning by the parliamentary legal adviser about how it is broadly carrying out its investigations and hearings.

Fine Gael Dublin South-East TD and committee member Eoghan Murphy said he was “concerned that we have already overstepped the mark” on the penalty points issue.

Legal protection
“Our role is oversight of public spending. Legal protection might not be there because we are acting outside our remit. We are not being careful enough.”

Waterford TD and committee member John Deasy said, “It is unwise for politicians to pose as judicial figures when they only have half the information. I don’t think the PAC is in any position to afford anyone legal protection.”

Mr Deasy and Mr Murphy maintained the committee had not agreed to call in the whistleblower, as chairman John McGuinness had claimed.

Mr Murphy also said it might be necessary for the PAC to have a vote to decide if the whistleblower would come before it.

Mr McGuinness said the whistleblower would only be discussing the money lost because of penalty points being quashed. “The rules of engagement are that he names nobody. He can’t name guards and he can’t name civilians.”

Sinn Féin TD Mary Lou McDonald said the committee was entitled to hear the evidence and that it was acting within its remit. Labour TD Gerald Nash said he had “concerns about mission creep on the committee”.

The committee’s legal remit is to examine public spending by any bodies that come under the remit of the Comptroller and Auditor General.

“We sometime use flimsy cover. If any whistleblower got arrested, we could blow every other whistleblower the State needs out of the water.”

Independent TD Shane Ross and Ms McDonald believe the whistleblower should give evidence in public. However, Mr Deasy said Mr Ross “speaks only for himself, he does not speak to the PAC as a whole”.