PAC given legal warning about its remit

Members uneasy about how committee was conducting itself in recent weeks 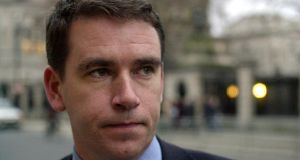 The Public Accounts Committee has been given a legal warning that it is in danger of straying outside of its remit in the way it is carrying out its hearings and investigations.

Melissa English, the parliamentary legal adviser in Leinster House, was responding to concerns from a number of PAC members about how the committee was conducting itself in recent weeks.

Ms English was said to have been “extremely blunt” in her warning, and told TDs they had “crossed the line” so much it was now a “dot in the distance”.

The issue was raised at a private meeting on Wednesday night by Fine Gael Waterford TD John Deasy, who was supported by party colleague Eoghan Murphy and Labour deputies Derek Nolan and Gerald Nash.

A number of PAC members have privately raised concerns about the workload the committee is taking on, and if it is entitled to look into as many areas as it is now.

Its legal remit is to examine public spending by any bodies which come under the remit of the Comptroller and Auditor General.

‘Ambulance chasers’
In recent weeks it has investigated the Central Remedial Clinic as well as calling in Irish Water, which led to some TDs calling the PAC “ambulance chasers”. It has called numerous people before it who had no obligation to accede to the committee’s request, and Ms English said it was only a matter of time before people refused to appear.

Committee chairman John McGuinness last night said it could seek to extend its responsibility to all organisations in receipt of taxpayer’s money.

It is understood a row was also sparked when Independent TD Shane Ross and Sinn Féin’s Mary-Lou McDonald requested that Rehab be asked to appear before the committee as soon as possible. Mr Ross and Ms McDonald argued this was justified since Minister for Justice Alan Shatter told the Dáil this week that Rehab lottery sales of €7.2 million only saw a profit of €558,000 in 2010.

However, Mr Deasy objected to this and said the committee should wait until it had more information before calling them in.

Mr Deasy said the committee needs to allow due diligence and process be carried out before rashly calling organisations before the committee.