Taoiseach rules out calling for conference on European debt 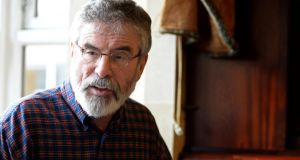 Gerry Adams: The Taoiseach was obviously not blind to the social inequality the Government’s policies had inflicted on communities, families and citizens. Eric Luke/The Irish Times

Taoiseach Enda Kenny has ruled out calling for a conference on European debt.

“It is not for Ireland to interfere in the issues raised in the context of a general election in another country,” he said.

“While we respect the challenges that face the Greek people for the time ahead, with 25 per cent unemployment, it is their decision who they elect in the forthcoming election,” he added.

Mr Kenny said Ireland’s growth rate was the fastest in western Europe, although that did not mean the Government was happy with current circumstances.

The Government had to continue providing stability because it brought investment, confidence and jobs, he said.

The Taoiseach was replying in the Dáil to Sinn Féin leader Gerry Adams, who said Ireland should not have to wait until the outcome of the election in Greece until something was done in the interests of the Irish people.

“Regardless of what government Greek citizens elect, you need to put a debt conference on the agenda of the EU,” he added.

Mr Adams said the Taoiseach was obviously not blind to the social inequality the Government’s policies had inflicted on communities, families and citizens.

He said a debt conference would open up a very real prospect of the State’s debt being significantly reduced, freeing up money for health and other public services.