Summer economic statement to be delivered within weeks, Dáil told

Tánaiste says too early to speculate on Budget 2018 contents 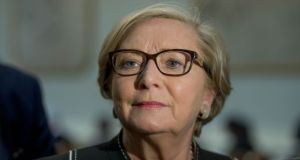 The Government’s summer economic statement will be published “in the coming weeks’’, Tánaiste Frances Fitzgerald has said.

Ms Fitzgerald told the Dáil on Thursday it was too early to speculate about the October budget, but it would be fair and would help people in every part of Ireland.

“As the Taoiseach said yesterday, we should focus on the totality of expenditure on taxation and examine existing spending programmes as well,’’ she added.

Ms Fitzgerald said the budget would also have to prepare Ireland for Brexit and ensure that competitiveness was at the heart of everything that was done.

She was responding to Labour leader Brendan Howlin who said it had been published last year on June 21st.

This year, it would probably be a month later than that, he added.

Mr Howlin said the notion of genuine budgetary oversight had gone out of the window.

“Instead of open and accountable budgeting, we are forced to look at Minister Paschal Donohoe giving us titbits of information on economic planning,’’ he added.