Seanad votes to hold referendum on its abolition

Senators have voted by 33 to 25 for legislation paving the way for the autumn referendum to abolish the House. 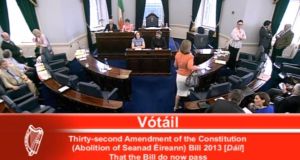 The legislation paving the way for the autumn referendum to abolish the House, known as the Thirty-second Amendment of the Constitution (Abolition of Seanad Éireann) Bill, is expected to pass all stages in the House

The Seanad has voted by 33 to 25 for legislation to allow a referendum on the abolition of the Seanad.

Cathaoirleach Paddy Burke said after the result was declared: “It’s now over to the people.”

The referendum takes place in the autumn but no date has been specified yet.

Earlier Fine Gael’s official Twitter account said the vote would be held on Friday October 4th. However 45 minutes after making the announcement the party tweeted: “Just to clarify date on previous tweet re #Seanad referendum was sourced from @rtenews.”

The ballot paper in the referendum on the abolition of the Seanad will ask the voter: “You are being asked if you agree with the proposal to amend the Constitution to abolish Seanad Éireann, to provide that from the date of such abolition the Oireachtas shall consist of the President and Dáil Éireann, and to amend other provisions of the Constitution that confer functions on Seanad Éireann or that are premised on the existence of Seanad Éireann. IF YOU APPROVE of the proposal, mark X opposite the word YES on the ballot paper. IF YOU DO NOT APPROVE of the proposal, mark X opposite the word NO on the ballot paper.”

Two of the Taoiseach’s five independent nominees Katherine Zappone and Mary Ann O’Brien voted against abolition. Fiach Mac Conghail, another nominee, was the only Senator absent for the vote.

Fine Gael rebels on the abortion Bill, Paul Bradford and Fidelma Healy-Eames voted with the Government.

Voting on the #Seanad referendum will take place on October 4th.

Just to clarify date on previous tweet re #Seanad referendum was sourced from @rtenews.

As expected senators voted along party lines with all Fine Gael and Labour members voting for the abolition legislation while all Fianna Fail and Sinn Féin members voted against.

Mr Crown who favoured reform rather than abolition said they wanted to end “Tammany Hall but we don’t want to replace it with the Politburo”.

The law known as the Thirty-second Amendment of the Constitution (Abolition of Seanad Éireann) Bill passed all stages in the House in a vote shortly after 4pm.

Earlier a claim by Fianna Fail Senator Diarmuid Wilson that Government Senators were being bribed with constituency projects to support the referendum to abolish the Seanad was strongly rejected in the House today.

Mr Wilson said he was “aware of Government Senators who have been told and promised that they will get certain projects if they stay in line’’. When Seanad Fine Gael leader Maurice Cummins challenged him on the claim, Mr Wilson insisted what he was saying was a fact.

Minister of State for Finance Brian Hayes said the charge was very serious and Mr Wilson had parliamentary privilege and should substantiate it. “Otherwise, that charge remains on the record of this House,’’ he added.

Independent TD David Norris intervened to say he had asked that the charge be investigated by the Committee on Procedure and Privileges. Mr Norris said everybody knew that “jobs and preferment’’ had been offered.

Mr Hayes advised Mr Norris to “stop abusing your privilege in this House’’.

Earlier, Mr Wilson said the Bill was tinkering with the Constitution and was wrong. “Colleagues voting for this Bill are voting to get rid of this House,’’ he added.

Also speaking, Fianna Fail Senator Darragh O’Brien said no Government Senator should come into the house again with any amendment. “You have voted no confidence in the chamber you purport to respect….none of you deserve any respect from this side after voting for this” , he said.

“The day that politicians are afraid of the public is the day you leave democracy,” Labour Senator Jimmy Harte said. “If the public do not abolish the Seanad it will become a much stronger organisation,” he said.

Independent Senator Ronan Mullen said Taoiseach Enda Kenny reminded him “of the Wizard of Oz” . “A relatively small man hidden behind a smokescreen of advisers and handlers but making a loud noise, and certainly managing to scare all the people under his command,” he said.

Fianna Fail Senator Labhrás Ó Murchú said senators were “trying to sell a pig in a poke to the people who already don’t trust us. Whatever outcome of the referendum, do we honestly believe the body politic will be enhanced and enriched?”

Independent Senator Jilllian Van Turnhout said the 90 day delay in the Bill should not be invoked “This is a question for the people and the people alone to answer”.

The Seanad is also due to vote on the Protection of Life During Pregnancy Bill later today.