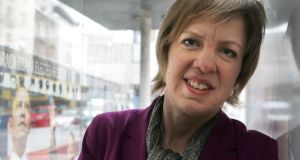 Labour Seanad leader Ivana Bacik described retiring Senator Feargal Quinn as “a model for us in terms of his activity and immense contribution to the Seanad over those years”. Photograph: Cyril Byrne/The Irish Times

The Seanad adjourned indefinitely after tributes were paid to retiring Senators and voters were praised for retaining the Upper House in the referendum. The Seanad election will take place after the Dáil election.

Independent NUI Senator Feargal Quinn, who introduced 17 Bills into Seanad, is retiring after 23 years. Fianna Fáil Senator Brian Ó Dómhnaill praised Mr Quinn for his “many years of distinguished service, not only to Seanad Éireann but to commerce, business, employment and economic activity within this State”. He also paid tribute to Fianna Fáil Senator Jim Walsh of Wexford, who retires after 19 years in the Upper House.

Labour Seanad leader Ivana Bacik described Mr Quinn as “a model for us in terms of his activity and immense contribution to the Seanad over those years”. Mr Quinn expressed the hope that members of the next Seanad would carry forward some of his Bills that had not yet been passed.

Mr Walsh quoted John Buchan’s Pilgrim’s Way in his final speech: “Public life is regarded as the crown of a career and to young men [and women], it is the worthiest ambition. Politics is still the greatest and the most honourable adventure.”

Fine Gael’s Pat O’Neill said: “During this term we retained the Seanad, and rightly so. I wish all incoming Senators all the best and hope their presence justifies why the Seanad was retained.”

Independent Trinity Senator David Norris said it had been an “extraordinary Seanad, one that actually voted for its own extermination, which was quite an unusual political gambit”.

Seanad leader Maurice Cummins said five referendums had been conducted in the past five years, including the children’s rights referendum, the marriage equality referendum and the Seanad referendum.

Senator Fiach Mac Conghail, who is standing down, acknowledged Taoiseach Enda Kenny for nominating him as a Senator. However, he criticised Ireland’s standing at the bottom of the European league for government investment in culture and the arts.