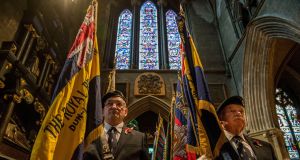 The 1916 Rising had been commemorated in an “inclusive and sensitive way’’ when compared to events in 1966, Dr Houston McKelvey, honorary chaplain to the Royal Naval Service, said on Sunday.

Delivering the sermon at the Remembrance Day service in St Patrick’s Cathedral, Dublin, Dr McKelvey said Ireland, after 1916, was polarised by the “two Gs’’ of the General Post Office and Gallipoli.

“There was a hidden record of war time service in Europe which in many places in Ireland would not, and perhaps could not, be referred to,’’ he added.

He said the first “path clearers’’ were former Donegal Fine Gael TD Paddy Harte and northern political activist Glenn Barr, who were involved in the setting up of the Island of Ireland Peace Park in Messines.

“This is a special day,’’ he said. “I watched the London ceremony on television before coming to the cathedral.’’

Wreaths were laid at the war memorial in the north transept by Minister for Heritage Heather Humphreys and Major General The O’Morchoe, president of the Royal British Legion in the Republic.