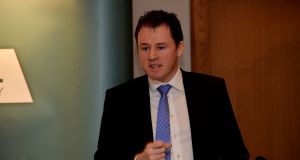 Education spokesman for most of the last Dáil, Charlie McConalogue’s first Fianna Fáil frontbench position was as spokesman on children. In a decimated party where virtually every TD had a frontbench role, it was a good learning curve for the new face of the party in Donegal in 2011. As education spokesman one area he focused on was small schools, and he repeatedly criticised the Government over cuts in funding for small schools, which he said accounted for 40 per cent of all national schools. An articulate politician from Carndonagh, he worked on the family farm after a time as political organiser for the Leinster region. He got married in 2015. A graduate of UCD where he studied politics, history and economics, he was elected to Donegal County Council in 2009. He also served as deputy mayor of the council. He served as Connacht Ulster representative on the party’s national executive before his election to the Dáil and is a former chairman of Ógra Fianna Fáil in Inishowen.