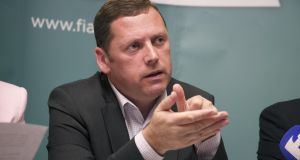 Outgoing TD Barry Cowen has been re-elected in the first count at the new Offaly North Tipperary constituency. Cowen is the party’s spokesman on environment and local government and a former spokesman on social protection.

He topped the poll in the new three seat constituency with a surplus of 1,357 votes. Cowen, a married father of four, was first elected to Offaly County Council in 1999 where he served until being elected to the Dáil in the 2011.

The auctioneer and Clara native was elected to the seat vacated by his brother, former taoiseach Brian Cowen, who bowed out of politics ahead of the 2011 general election. A Cowen has represented Offaly for Fianna Fáil in the Dáil continuously since 1977.

Barry’s father Ber Cowen was elected to the Dail from 1969 but lost the seat in 1973. He regained it in 1977 and held it until his untimely death in 1984. This triggered a byelection which was won by the then 24-year-old Brian Cowen.