Pat Rabbitte departure big blow to Labour ahead of election 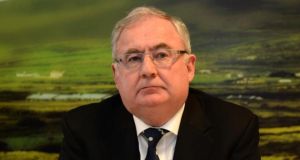 Pat Rabbitte has confirmed that he will not stand for re-election. Photograph: Dara Mac Donaill / The Irish Times

Pat Rabbitte ended months of speculation yesterday by confirming he will not stand for re-election.

The former Labour leader told his party colleagues of his decision last night.

The news is a big blow to the Labour party who have already lost two of its former leaders in Eamon Gilmore and Ruairí Quinn.

With them they take a wealth of experience that the Labour party desperately needs going into what will be a critical general election for them.

Some would say it is out with the old and in with the new. But there is no new - there are no natural successors for any of the three men in their constituencies.

Mr Rabbitte’s departure is a double blow for Labour because he was one of a few TDs who was guaranteed re-election.

A recent internal poll showed he would be the third candidate elected in Dublin South West.

His constituency colleague Eamonn Maloney was on an unelectable 3 per cent in the Labour poll.

So with him he takes a safe Labour seat - one of only a few the party has. Leader Joan Burton and deputy leader Alan Kelly’s seats are hardly secure in what are two extremely tough constituencies.

Relations between Ms Burton and Mr Rabbitte were practically non-existent, but as the TD packs his bags and heads for radio and TV studios across the country, even Ms Burton must be concerned about his departure.

Mr Rabbitte wasn’t the first and he might not be the last.There are also question marks over whether TDs Sean Kenny, Jack Wall, Kathleen Lynch and Eamonn Maloney will run again.

The election will be a bruising one for the Labour party.

The latest poll showed them slump to 7 per cent and with their most experienced troops jumping overboard, things are looking bleak for the Labour party.

Joan Burton already had a huge task ahead of her to convince the electorate to trust Labour again.

That infamous “job of work to do” just got a lot tougher.