One-Parent Family Payment changes to be raised in Seanad 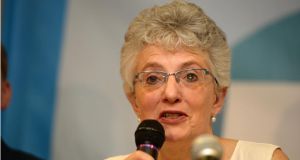 Changes to the One-Parent Family Payment (OPFP) are to be raised in the Seanad on Wednesday by Independent Senator Katherine Zappone.

Ms Zappone said the State now appeared to be saying that parents in one-parent families should be compelled to work full-time.

“Single parents want their parental responsibility recognised, while some want access to full-time education with proper State support for their children,’’ she said.

Ms Zappone was speaking in Dublin after meeting a group of lone parents in Leinster House.

The department is insisting the changes are necessary to move lone parents away from the ‘’passive’’ OPFP scheme and into the labour market.

Single parent Louise Bayliss, from Dublin, who has a seven-year-old daughter, said today that a working lone parent on the minimum wage was losing €118 weekly based on the changes being introduced.

“We cannot afford that,’’ Ms Bayliss said. “We were already the poorest category in the country.’’

Ms Bayliss said her choice would now be between long-term social welfare dependency or working full-time.

Leah Speight, also from Dublin, who has a 15-year-old son, claimed the State was no longer recognising that he depended on her.

Taoiseach Enda Kenny recently defended the changes in the Dáil, arguing they were aimed at reducing long-term social welfare dependency.

“These reforms aim to provide the necessary supports to lone parents to help them access a range of education, training and employment programmes, develop a skillset and, ultimately, secure employment and financial independence.’’