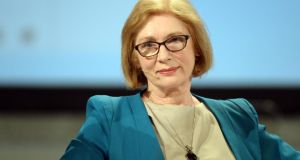 Minister for Education Jan O’Sullivan: she said the task force consisted of a number of highly respected members from inside, and external to, NUI Galway. Photograph: Cyril Byrne

She told the Seanad the institution “was at the forefront of the universities sector in this respect”.

Ms O’Sullivan said the university had set up a task force, chaired by Prof Jane Grimson, former vice-provost of Trinity College. “The task force will set out its full and detailed terms of reference after its first meeting in the coming weeks,” she added.

The Minister was replying to Sinn Féin Senator Trevor Ó Clochartaigh, who expressed surprise at her confidence in the university.

Ms O’Sullivan said the task force consisted of a number of highly respected members from inside, and external to, NUI Galway. She said she considered them well placed to advise the university on its policies, procedures and a range of initiatives to achieve gender equality in promotion.

“This has been a real force for change in other countries, and I hope to see it have similar positive effects for women working in higher education in Ireland. ”

She said the Higher Education Authority was actively considering how best to support the improvement of gender equality throughout the Irish higher education system and was developing a database of staff employed in the sector.

She said this data revealed that in Ireland women represented 43 per cent of academic staff in universities and institutes of technology.

However, only 21 per cent of professors and associate professors in Irish universities were female.