Master of Holles Street: ‘extraordinary’ that a woman could face this punishment 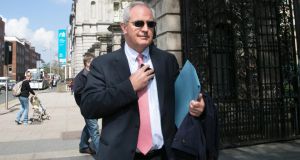 Dr Peter Boylan, former master of the National Maternity Hospital: estimated there were some 60 terminations in hospitals in the State annually. Photograph: Gareth Chaney Collins


Provisions in abortion legislation that a woman could face up to 14 years in prison if she has a termination in Ireland do not make any sense, the former master of the National Maternity Hospital has said.

Dr Peter Boylan said in his submission to the Oireachtas hearings that it was “bizarre and contradictory” to propose a woman be sentenced to 14 years in prison for accepting medical advice in this State and having a termination.

This was particularly so when she “has the constitutional protection of this country if she goes to the UK and has the same procedure. It doesn’t make any sense at all,” he told the committee.

Master of Holles Street hospital in Dublin Dr Rhona Mahony described it as “extraordinary” that a woman could face this punishment.

Under heading or section 19 of the proposed Protection of Life During Pregnancy Bill it is an offence for a person to do any act with the intent to destroy unborn human life.

The section restates the general prohibition of abortion in the State under article 40.3.3 of the Constitution, and includes an infinite fine and up to 14 years imprisonment.

She said the woman herself should not be criminalised. Chief medical officer Dr Tony Holohan told her “it is something we can look at in terms of drafting”.

Later during a question and answer session Dr Mahony said terminations of pregnancy were performed in Irish hospitals to save a woman’s life. “These are rare.”

She said that her hospital was one of the busiest maternity hospitals in Europe.

Dr Mahony said it was very difficult to estimate the incidence of suicides. It was extremely rare.

Asked by Labour TD Ciara Conway if the legislation would save lives, Dr Mahony said the legislation “would provide protection and flexibility for doctors to do their job”.

“ I believe it will give doctors some peace and prevent hesitation where doctors are uncertain about whether or not they may act.”

She said doctors would always try to save a life “but at the moment what is wrong is that they don’t have the necessary legal protection” and the Bill provided this.

In a session last night with obstetricians outside Dublin Dr John Monaghan, a consultant at Portiuncula Hospital in Ballinasloe, Co Galway, warned that the serious problem of increasing suicide in Ireland and reporting of it might affect suicidal ideation in people exposed to it.

‘Vulnerable’
He said “to relate a crisis pregnancy situation to suicide in a legislative Act may of itself increase suicidal ideation in some women who are pregnant and vulnerable”.