Hanafin only ex-senior FF minister outside Dail to run 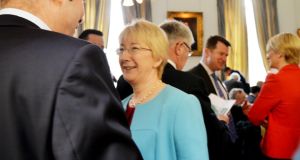 Mary Hanafin and Micheal Martin at unveiling of the Fianna Fail party’s programme of events to mark the centenary of the 1916 rising. Photograph: Alan Betson / The Irish Times

Mary Hanafin is now expected to be the only former senior Fianna Fail minister outside the Dail seeking a party nomination to contest the next general election.

Ms Hanafin is hoping to run in Dun Laoghaire, where she held a seat from 1997 until the last general election.

She was elected to Dun Laoghaire-Rathdown County Council in the 2014 local elections, having resisted attempts by party headquarters to get her to stand down because of her late entry into the race.

“The party does not want anybody on the ticket from its controversial past in government, and it seems as if Mary Hanafin will be the only one from that time looking for the nod,’’ said a Fianna Fail source.

“We want new blood in constituencies like Dun Laoghaire, where we have no TD, but it remains to be seen if she can be stopped.’’

Former Fianna Fail minister and ceann comhairle John O’Donoghue withdrew some time ago from the contest for a Fianna Fail nomination in the Kerry five-seater, despite showing considerable enthusiasm to run after losing his seat last time.

Although former minister Mary Coughlan has not ruled out seeking a nomination to contest the new Donegal five-seater, party sources believe her name will not come before a selection convention.

In Dun Laoghaire, Ms Hanafin, who served in a number of ministries, will be battling for the nomination with councillors Kate Feeney, with whom she shares the Blackrock ward, and Cormac Devlin, from the Dun Laoghaire ward.

There is speculation that Jennifer Cuffe, who represents the Killiney-Shankill ward, may also seek a nomination.

Dun Laoghaire is a four-seater but the automatic re-election of Ceann Comharle Sean Barrett, of Fine Gael, would effectively reduce it to a three-seater. The other TDs for the constituency, Labour’s Eamon Gilmore, Fine Gael’s Mary Mitchell O’Connor and People Before Profit’s Richard Boyd Barrett, are expected to stand again.

The constituency was once a Fianna Fail stronghold, returning two seats. But as the party’s share of the vote fell by 19.64 per cent to 15.23 per cent last time, the other outgoing Fianna Fail TD Barry Andrews also lost his seat.

Fianna Fail is expected to run one candidate and, while insisting that the choice is a matter for local delegates, the preference of party headquarters is for a candidate new to the field.

Ms Feeney, the first female president of Ogra, the party’s youth branch, has particularly strong credentials at a time when Fianna Fail is attempting to rejuvenate itself.

Ms Feeney, a chartered accountant, said yesterday that while it was important to return sitting TDs to the Dail, “new candidates and new voices’’ were also required. She said she was particularly conscious of the challenges facing her peer group, in areas such as housing and child care.

But nobody is underestimating Ms Hanafin, who outpolled Ms Feeney in the Blackrock ward by 1,501 votes to 1,288.

Ms Hanafin’s father Des and brother John served in the Seanad, while Ms Feeney’s mother Geraldine was also a senator.

How to have a happy Halloween, Christmas and St Valentine’s this winter