Opinion: Simple legislative changes could improve the Seanad at a stroke 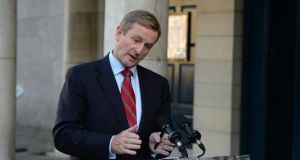 The cynicism hasn’t stopped. They (Fine Gael and Labour) promised during the referendum campaign they would not reform the Seanad in the event of a No vote and this is a promise they will try to honour, while pretending the opposite.

Enda Kenny said on Saturday afternoon he would need to “reflect” on how the Seanad could contribute to the reform of the political system. Since Enda has not had much practice in reflecting, this might take a while, and, most likely, the decision will be to refer the issue to the constitutional convention, as suggested over the weekend by that master of procrastination, Pat Rabbitte. Then more reflection and perhaps referral to an all-party committee and, before we know it, the election and the Seanad elected on the same basis as always.

This tactic could be subverted by a co-ordinated Opposition strategy to propose the enactment of a simple Bill to give everyone a vote in the next Seanad election, to be held on the same day as the general election. Because of the terms of the Constitution, the election would have to be to the five panels mentioned there: a culture and education panel; an agriculture and fisheries panel; a labour panel; industry and commerce panel; and a public administration panel.

Neither does there seem to be any problem ensuring that everyone has a single vote in Seanad elections.

An expanded role for the Seanad could be dealt with by further legislative change – the provision allowing the Taoiseach to nominate 11 people to the Seanad would require constitutional change.

The changes would improve the chamber at a stroke, there is no need for further “reflection” or for the view of the constitutional convention or of an all-party committee. It could and should be done before Christmas and, if the Opposition is clever, the Government can be embarrassed into going along with it.

There will be much wind from the Government benches on political reform, every puff of which will avoid the central issue of unaccountability.

Richard Bruton will do more flapping around on the new powers of Oireachtas committees, while dodging the issue of control of such committees the Government will continue to exercise through the whips.

There is a great deal of necessary reform which will never even be addressed. For instance, it is obvious that there is a widespread indifference to what happens in politics and a great swathe of the electorate is alienated from the process. And it is no wonder. People, justifiably, feel they have little or no influence over what happens.

Political class
They are allowed a vote every four or five years and a choice between one crowd and another, each of whom will do exactly the same as the other would do if elected to office. The big decisions – eg, the bank guarantee, EU-IMF bailout – are taken by this political class over the heads of the people.

The State’s first constitution had a provision for the people insisting on referendum on whatever petitioners thought was important. Why should the people be denied a similar power, including the power to initiate constitutional change?

If more people were directly involved in the political process, the electorate would be more informed. For instance, if there were term limits on service in the Dáil or Seanad – say two three-year terms (no more than six years) – over a period of 30 years more than 1,000 people probably would have been through the system and would be a valuable community resource.

It would also mean that more people would be willing to serve a single term in the Oireachtas and then return to their “ordinary” lives.

Electronic voting would also help, allowing voters to register their constituency vote in any polling station by inserting their voting card in the polling computer which would automatically upload the relevant ballot paper.

We could transform the gender representation in politics by providing for elections on a two-list basis, one of women, one of men, with an equal number of each being elected for every constituency.

There might also be a vibrant local democracy – with town and village councils, each with meaningful powers. And a transformative reform: getting rid of ministers, all of them, forever. But that’s for another day.

But none of this will happen, until there is some catastrophe that propels us into a violent change at enormous personal cost to very many people.