Government given food for thought over banker’s pay 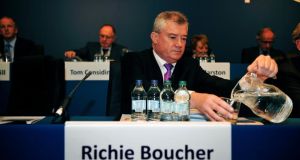 The Dáil heard a tale of two Irelands yesterday.

It centred on the controversy surrounding a handsomely paid senior banker and a Waterford family’s struggle to put food on the table at a time of deep recession.

He noted that tens of thousands of homeowners had woken up yesterday to learn of yet another mortgage rate hike, this time from AIB and EBS. It was even more galling, he said, for those people who had followed the proceedings whereby Boucher’s package was endorsed.

He asked Tánaiste Eamon Gilmore where Labour stood on the issue. A few years ago, he said, Labour believed that bankers’ pay should be capped at €250,000. He wanted to know if the party had been in full agreement with the Government’s decision not to oppose the package.

Gilmore replied that he did not agree with the top levels of bank pay. Silent backbenchers nodded approval.

Sinn Féin’s Brian Stanley asked: “Why did the Tánaiste not vote against them then ?’’

Gilmore gave the same explanation as Taoiseach Enda Kenny and Minister of State for Finance Brian Hayes had advanced earlier in the week.

The Government, he said, had commissioned Mercer to do a report and it had recommended reductions of between six per cent and 10 per cent in bankers’ pay. His view was that the highest reductions should come from those paid most.


Personal insolvency
Mac Lochlainn observed that the 19,000 people expected to engage with the personal insolvency service were being forced to do so because of a crisis created by vested interests across the banking sector.

Independent TD John Halligan referred to surveys indicating that the Irish consumer was still paying premium prices for groceries when compared to elsewhere in the EU.

And he outlined one family’s circumstances in his Waterford constituency.

“I was in a house last week with a mother and four children. The mother was ill and the eldest daughter, who is 14, was making dinner,’’ he added.

“I was saddened and upset to see that the dinner consisted of beans and chips. That is wrong. It was their Sunday dinner.’’

The Tánaiste said the Government would legislate to regulate anti-competitive practices in the grocery sector.

Halligan said Ireland was in the grip of a nutritional recession, triggered by food poverty.