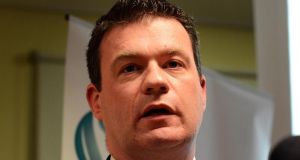 Minister for the Environment Alan Kelly said: “Some comments made previously earlier on in the week by a colleague of mine were unnecessary and probably silly, to be frank - you know, lecturing people as regards the consequences of what happens if they don’t pass this legislation.” Photograph: Eric Luke/The Irish Times

The Government had a comfortable Seanad majority of 31 to 26 in the first vote on the Water Services Bill, with the support of four Independents.

Senators Jillian van Turnhout, Feargal Quinn, Fiach MacConghail and Marie-Louise O’Donnell backed the Government in the vote on the second stage of the controversial legislation, which gives effect to the changes the Government recently announced in the water charges regime.

There remains a possibility that Minister for the Environment Alan Kelly may accept amendments from the Seanad, in which case the Dáil will have to sit on Tuesday to also pass these amendments and ensure the legislation is passed before the end of the year.

There is a requirement for passage by the end of year to allow billing for water to commence in January.

The Minister, without naming him, criticised Minister for Health Leo Varadkar, for “silly” remarks and for “lecturing” people on the consequences of the legislation not being passed.

Mr Varadkar had warned Senators that if they rejected the new legislation, the public would face higher bills in January. His understanding was that the status quo would apply, and that meant the earlier higher charges for water.

Referring to the remarks, Mr Kelly said: “Some comments made previously earlier on in the week by a colleague of mine were unnecessary and probably silly, to be frank - you know, lecturing people as regards the consequences of what happens if they don’t pass this legislation.”

He said everyone knew the consequences one way or the other of whatever the result was.

Mr Kelly pointed out that “if this legislation isn’t passed, the previous legislation exists. That’s just a simple fact.”

He added that the legislation, whether passed or not, would not change the fact that Irish Water would exist and operate.

The first elected politician to publicly consider positively the notion of privatisation, Mr Quinn said he was not opposed to the possibility at some point of privatisation, not immediately, but perhaps in a number of years.

He pointed to the benefits of competition, recalling when Ireland had one national airline with no competitors.

Fianna Fáil’s Mary White, whose party opposes the Bill, acknowledged Mr Quinn’s remarks on competition, describing it as the “spice of life” and said there should be a debate on privatisation.

Independent Katherine Zappone, who voted against the second stage of the Bill, said the Irish Water quango could be transformed into a public utility “that provides people’s right to water in a fair, affordable, efficient and effective manner”, through further amendments to the legislation.

“I am not of the view that we need to abolish Irish Water, and as lawmakers we have in our power the ability to transform it.”

Sinn Féin’s Kathryn Reilly said the problem of introducing charges in Ireland was that “far too many people have inadequate incomes relative to the cost of meeting their basic needs”.

NUI Senator John Crown said the priority “should have been on day one to fix the infrastructure. The second priority, only then, to devise some degree of metering and/or billing capacity.”

He had heard estimates of between €430 million and €540 million just to get the billing and metering up and running. “We have completely lost the incentive for conservation.”

Trinity Senator David Norris said he was “sick to my back teeth of members of the Government bouncing around like turkey cocks on the plinth and expostulating about their awful difficulties - what they are going to do about the water charges?”

He said they were “bouncing around and hoping to the lord God that they will actually survive the coming culling”.

Committee stage of the Bill will resume on Friday.