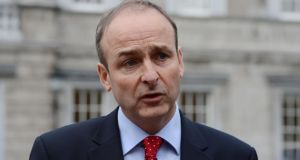 Fianna Fáil leader Micheál Martin has confirmed his party’s intention to stand for election in Northern Ireland in 2019. “I’ve set that as a target to field candidates,” he said.

The party passed a motion from Donegal North East and Dublin Bay South delegates without debate – it called for active and serious participating and engagement in the political process in Northern Ireland. “Following on from this, the party should begin fielding candidates for election there for 2019.”

Mr Martin said the party had a growing northern membership who were anxious to participate. The party has already begun to organise locally with the establishment of a number of cumainn.

Speaking to reporters, Mr Martin highlighted his particular interest in the North “to keep it on the Government radar”. He said he visited the North quite often and had made some significant speeches on Northern Ireland and North/South issues.

“We’re impatient with the lack of progress North/South,” he said. “The first phase of our engagement with the North is very much on a policy basis. In terms of an electoral phase, I think 2019 would be a key date in terms of targeting for participation in Northern elections.”


Venue issues
The debate on electoral participation in the North is one of more than 200 motions being debated at the two-day ardfheis in Killarney, Co Kerry.

A Donegal North East motion protesting at the holding of the ardfheis repeatedly in Kerry was passed. It requests that “the location of all future ardfheiseanna be a central location so as to encourage maximum participation of the party membership”.

But Mr Martin said Kerry “has the largest membership in the country and I think that augurs well for us”.

Much of the focus over the weekend will be on promoting their local and European election candidates. In the local elections, “we’ve over 400 candidates and it’s a good balance between trusted experienced public representatives and new people, about 35 per cent of the candidates are new and entering politics for the first time”.

He said more than 16,000 party members exercised their franchise in choosing candidates. “It’s the largest-ever participation of members in the selection of candidates.”