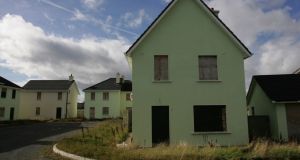 Calling for a grant scheme for homeowners in rural towns and villages, there were, John Brassil added, an “enormous number” of empty houses across all local authorities, with one in three houses vacant. File photograph: Eric Luke/The Irish Times

The National Asset Management Agency (Nama) was “set up to solve a problem, not to create another one”, the Dáil heard during a debate on housing and homelessness.

Fianna Fáil TD John Brassil asked if the State “could acquire houses back from vulture funds through Nama”.

Such a proposal should be looked at and there should be joined up thinking between the Department of Environment, Nama, housing agencies and local authorities, the lending agencies and the Construction Industry Federation, he said.

In his maiden speech to the Dáil, he said “in many areas there are adequate houses, they need to adopt measures to make them habitable”.

Calling for a grant scheme for homeowners in rural towns and villages, there were, he added, an “enormous number” of empty houses across all local authorities, with one in three houses vacant.

Sinn Féin Offaly TD Carol Nolan, in her maiden speech, said the previous government built only a fraction of the necessary social housing and failed to deal with rapidly rising rents, and the crisis showed a waiting list varying between 90,000 and 130,000.

Fine Gael TD Josepha Madigan, in her maiden speech, said a single government department with a cabinet minister for housing was needed to draw all the strands together.

Fianna Fáil TD Shane Cassells said the biggest problem in local authority areas was the procedural issues. In his maiden speech to the Dáil, the Meath West TD said the main stumbling block was the time lag between the allocation of funding to the stage where the housing is ready.

Independent TD Clare Daly blamed the housing problem on the Department of the Environment.

Ms Daly said the department was claiming responsibility for delivering 13,000 extra social housing units last year. “It is simply not the case,’’ she said, adding many of them were houses which were already there,.

She said the solution was to build social housing, although not exclusively.

Minister for the Environment Alan Kelly said the foundations for dealing with the problems in housing had clearly been laid and “if built on correctly by the incoming government, will bear fruit in the time ahead”.