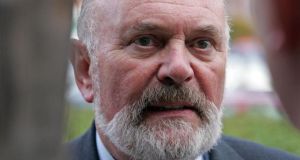 Independent Senator David Norris: supported the call for a debate, and said Fianna Fáil Seanad leader Darragh O’Brien “as a descendant of Brian Ború . . . should have declared an interest”.


A call has been made for “proper regulatory oversight” to be put in place for the Environmental Protection Agency (EPA), which has been described as a “law unto itself”.

He called for a debate on what he called the lack of accountability from the EPA. “This country will rue the day we continued to turn a blind eye and allowed the EPA.”

Mr Whelan referred to the Enva plant in Portlaoise, a hazardous waste-processing facility, where carcinogenic materials were released close to a residential area, and said other areas were affected by such issues including Askeaton, Tynagh, Kerdiffstown and Shannon.

Claiming the EPA “does what it likes with immunity”, he said the agency was accountable to no one.

“We need proper regulatory oversight and accountability for the Environmental Protection Agency. Otherwise we will wake up to . . . a disaster with serious consequences for pollution and public health.”

Earlier Fianna Fáil Seanad leader Darragh O’Brien called for a debate this week on the commemoration of the Battle of Clontarf 1,000 years ago. Events were planned in Glasnevin, Clontarf and Swords, all across Dublin and in Dromoland, and “it would be appropriate for the Seanad to set some time aside” for statements.

Independent Senator David Norris supported the call for a debate, and suggested Mr O’Brien, “as a descendant of Brian Ború . . . should have declared an interest”.

Fianna Fáil’s Paschal Mooney suggested in the wake of the President’s State visit to Britain that the debate on whether Ireland should consider rejoining the Commonwealth might be reopened.

“I am not advocating that we join, but I am suggesting the issue could be explored in the new environment in which we have operated since the Good Friday agreement, with a continuing and an evolving relationship with the United Kingdom, including the evolution of North-South bodies.”