Department does not trust GPs to prescribe cannabis, TD claims 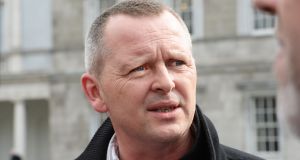 Richard Boyd Barrett, People Before Profit: has criticised plans to allow limited access to medicinal cannabis for patients with three medical conditions only and only through specialist consultants .Photograph: Cyril Byrne

The Department of Health does not trust GPs to prescribe cannabis, a Dáil committee was told on Thursday.

Richard Boyd Barrett criticised plans to allow limited access to medicinal cannabis for patients with three medical conditions only and only through specialist consultants.

Speaking at the Oireachtas Committee on Health, he said GPs should be allowed to prescribe cannabis, but were not trusted. A survey of GPs showed 58 per cent were in favour of legislation for medicinal cannabis use, he said.

Eugene Lennon, of the Department of Health medicines and controlled drugs unit, said the department did trust GPs, but had concerns about doctors prescribing cannabis for any condition. He also said the survey cited was only responded to by 15 per cent of GPs.

Mr Lennon said the proposed new access programme would allow consultants prescribe medicinal cannabis for severe intractable epilepsy, nausea and vomiting after chemotherapy, when other drugs have not worked, and for plasticity in patients with multiple sclerosis (MS). Consultants could also still apply for licences to allow treatment of patients with other conditions.

He said consultants’ reluctance to apply for licences to date was generally because they were not happy with clinical evidence for the effectiveness of cannabis.

Mr Lennon also said Ireland was “moving quite quickly” and “proceeding in a responsible way” with its access programme. There was already a group, chaired by Dr Maureen Ryan of the Health Information and Quality Authority, drawing up guidelines for it. In the EU, eight countries had access programmes and three had more liberal regimes, he said, while others had no access.

He highlighted concerns the department had with the Cannabis for Medicinal Use Regulation Bill 2016, proposed by Gino Kenny (PBP), which is currently under scrutiny by the committee.

He said the legislation was not in the public interest and there were elements that seemed to be heading toward decriminalisation of recreational cannabis.

Medicines could not be authorised through a Bill, which is what the legislation tries to do, he said. He also did not believe, as was suggested in the Bill, that a separate regulatory system for pharmacists would be necessary for cannabis, outside of existing regulations.

Also giving evidence, Niall Byrne, of the Pharmaceutical Society of Ireland, agreed. He said the supply of cannabis through pharmacies would be on a “safe footing”.

Nearly half of passengers arriving into Ireland were on holiday - Taoiseach 20:51
Pay dispute talks between Government and public health specialists to continue 20:37
Sharp increase in the number of Covid-19 family outbreaks 20:19
Varadkar says up to 100,000 vaccines a week expected from April 20:05
Jim Allister says NI protocol points towards push for united Ireland 19:35