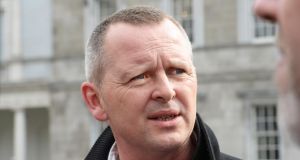 People Before Profit TD Richard Boyd Barrett claimed the Government had prevented Bríd Smith’s legislation from progressing ‘because the Taoiseach and the Government do not support its contents’. Photograph: Cyril Byrne/The Irish Times

The Dáil has been suspended twice in a row over legislation to ban the granting of any further oil and fossil fuel exploration licences.

People Before Profit TD Richard Boyd Barrett claimed the Government had prevented his colleague Bríd Smith’s legislation from progressing through the Oireachtas “for political reasons because the Taoiseach and the Government do not support its contents”.

Mr Boyd Barrett that said “in a cynical and despicable effort to defend the fossil fuel industry and oil exploration companies, Fine Gael and their Independent Alliance colleagues are abandoning their promise in the programme for government to take radical and ambitious action on climate changes”.

He accused the Government of “sabotaging the democratic process of this Dáil” to prevent Bríd Smith’s Climate Emergency Measures Bill progressing.

Ceann Comhairle Sean Ó Fearghaíl told Mr Boyd Barrett he was bringing the House into disrepute when he continued speaking and then Government TDs began heckling.

Mr Ó Fearghaíl then suspended the House for five minutes.

When the House resumed, Mr Boyd Barrett stood to make a point of information. Leas Cheann Comhairle Pat “The Cope” Gallagher ruled him out of order and when he continued speaking, he suspended the House for 10 minutes.

When the House resumed again Mr Gallagher pointed out that the business committee had dealt with the issue and Mr Boyd Barrett was aware of this and how it could be dealt with.

Tánaiste Simon Coveney said that “because of the disagreement on this issue and that it is stalled at committee it is for the sponsor of the Bill to introduce a motion at private member’s time”.

Mr Coveney said it was a matter for the business committee and not for the Government.