Opinion: There is limited scope to question on the basis an alleged error of fact 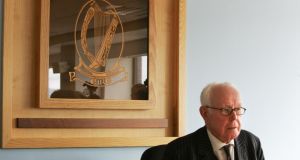 The challenge made to the central findings of the Smithwick Tribunal by former gardaí John O’Brien, Michael Finnegan and Michael Staunton in this newspaper earlier this week highlights the nature of a tribunal of inquiry and the factors that may influence its ability to perform what is normally its central task – that of allaying public concern about a matter of urgent public importance.

The three former officers make trenchant criticisms of the reasoning and the evidence that the tribunal used in finding that, on the balance of probabilities, some person within Dundalk Garda station colluded with the Provisional IRA by providing information that assisted them in murdering RUC Chief Supt Harry Breen and Supt Robert Buchanan.

In assessing what options there are for an official response to these criticisms, or, indeed, what the public should make of them when assessing this issue, several points should be borne in mind.

Firstly, there is very limited scope for challenging the report of a tribunal by way of judicial review in the High Court, on the basis that it has committed an error of fact of the kind that the three officers claim. Generally speaking, the High Court can grant an order quashing a tribunal’s finding of fact only if it is the result of a breach of fair procedures or “it plainly and unambiguously flies in the face of fundamental reason and common sense”.

This is a principle that was reiterated as recently as last march by Ms Justice Dunne in a case brought against the Mahon tribunal.

Secondly, in order to bring such a challenge to the basic finding of collusion, some party with standing to do so would have to come forward. The three former gardaí – Finbarr Hickey, Leo Colton and Owen Corrigan – whose conduct in 1989 came under special scrutiny, were all held by the tribunal not to have been shown to have been guilty of the collusion that the tribunal found to have occurred, and the tribunal also refers to material that points to some other, unspecified person as having been responsible.

In the circumstances, it seems unlikely that an application for judicial review, on this ground, would be brought by any of the three named former gardaí, or by any of their former colleagues who could be in a position to claim that suspicion was cast on them by the report.

Heavy burden
It seems equally unlikely that two other possible applicants, the Garda Commissioner or the Attorney General, would seek judicial review of the report, especially given the very heavy burden that any applicant would have in persuading the High Court to quash a finding on the basis that it was factually incorrect.

It is useful to recall that a tribunal finding of fact is merely a statement of the tribunal’s view of the facts, a “finding” that has no direct legal consequences for the person against whom it is made.

To establish civil or criminal liability against such a person, separate civil or criminal proceedings have to be brought and the case against him or her proved over again – in the case of a criminal prosecution, without relying on any admissions that the person may have made in his or her evidence to the tribunal.

Moriarty Tribunal
As we have seen from Denis O’Brien and Michael Lowry’s response to the Moriarty tribunal’s findings, a person is free to contest, through the media and otherwise, findings made against him or her and to use whatever influence he or she has to persuade people to disregard them.

It seems unlikely that any other formal mechanism could be devised for an appeal against or review of a tribunal’s findings of fact.

Given the criticism of the length and cost of tribunals of inquiry in this country, adding an extra layer of reinvestigation would surely be unpalatable to almost everyone concerned.

Where do we stand, then, in the wake of this particular contestation of a tribunal’s findings?

The tribunal’s own report acknowledges the unusual circumstances under which Judge Smithwick was tasked with investigating the “suggestions” of Garda collusion in the murder of the RUC officers. The two main factors here were the length of time that had elapsed since the incidents in question and the difficulties in conducting a cross-Border inquiry without powers to compel evidence from the other side of that Border.

Complication
These are factors that the three Garda critics of the report also make a major part of their analysis. Judge Smithwick also recognised that the fundamental changes that had occurred in the political and security landscape since 1989 also complicated his task in making recommendations.

Against that background, the finding of collusion, bitterly contested though it may be, can be seen as standing somewhat apart from the recommendations.

In the light of the challenge to the report, closer co-operation between the Garda, up to and including “the legal and procedural structures for the seamless investigation by joint police teams of crimes with a cross-Border element” and giving “any future investigation, commission or tribunal of inquiry in relation to a historic crime with a cross-Border element . . . power to hear evidence, compel the attendance of witnesses and make orders for the discovery of documents in both jurisdictions” seem particularly important, as they address some of the central elements that the tribunal itself has now encountered.