Time to ‘forget about reports, sitting on the fence, fudging things’ 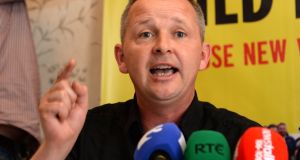 If the Government wants to reduce carbon emissions, it needs to ban hydraulic fracturing (fracking), the Dáil has heard. Independent TD Richard Boyd Barrett was introducing a Bill to ban fracking, a method used to extract shale gas. He pointed to the Government’s commitment in a White Paper on energy to cut emissions by up to 95 per cent by 2050.

Mr Boyd Barrett said the Prohibition of Hydraulic Fracturing Bill calls for the Government to “take bold action to contribute to preventing further climate change and reduce fossil fuel use by banning fracking”.

“Forget about reports, investigations, sitting on the fence and fudging things. It should just be banned.”

The Dún Laoghaire TD said there was no need for a report by the Environmental Protection Agency (EPA) “to tell us that if we bring up shale gas through hydraulic fracturing, we will add to fossil fuel use and we will increase carbon emissions. There is no doubt about that, so there is nothing to investigate.”

In fracking, water is pumped at high pressure to fracture rock and make shale gas accessible. Co Leitrim has been identified as having potential for fracking. The EPA is investigating the possibility of its introduction and its environmental impact.

Mr Barrett said to “prevent runaway climate change”, two-thirds of the world’s known oil and gas reserves had to stay in the ground.