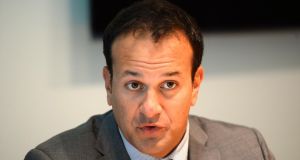 A message from prominent anti-abortion campaigner Cora Sherlock referring to Minister for Health Leo Varadkar’s intervention in an abortion debate was re-tweeted by @OireachtasNews on Tuesday night. Photograph: Cyril Byrne /The Irish Times

It came after Mr Varadkar told the Dáil existing abortion legislation had no regard for a mother’s long-term health.

“If a stroke, heart attack or epileptic seizure happens, perhaps resulting in a permanent disability as a result, then that is acceptable under our laws. I don’t think that’s right,” he said.

As a woman with epilepsy, I am deeply offended & shocked by @campaignforleo where he supports abortion on demand @epilepsyireland

By using epilepsy to further his campaign for abortion on demand, @campaignforleo has shown that epilepsy stigma is alive & well. #shame

Mr Varadkar was speaking in the Dáil on a private members’ Bill tabled by Independent TD Clare Daly.

Afterwards, Ms Sherlock, who is a lawyer, tweeted her criticism of Mr Varadkar’s remarks.

Her tweet, which was re-tweeted by @OireachtasNews, stated: “As a woman with epilepsy, I am deeply offended & shocked by @campaignforleo where he supports abortion on demand @epilepsyireland”.

At 9.30 on Wednesday morning, this tweet was posted on @OireachtasNews: “We have removed a re-tweet from our account.It wasn’t a sanctioned re-tweet and so wasn’t an official statement/endorsement”.

She also said: “By using epilepsy to further his campaign for abortion on demand, @campaignforleo has shown that epilepsy stigma is alive & well. #shame”.