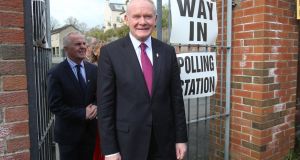 Northern Ireland’s political leaders have cast their votes in the election for the Stormont Assembly.

Democratic Unionist leader and outgoing first minister Arlene Foster voted at a polling station near her home in Brookeborough, Co Fermanagh, while long time Sinn Féin deputy first minister Martin McGuinness was accompanied by party colleagues as he dispatched his ballot in his native Derry.

Earlier at the same Northland Road polling station in Derry, SDLP leader Colum Eastwood carried his daughter Rosa into the building as he voted, while across the region, in Strangford, Ulster Unionist leader Mike Nesbitt voted at Gilnahirk Primary School.

The poll is the first chance to vote for people born after the historic Good Friday Agreement.

Eighteen years on from the signing of the 1998 peace accord that paved the way for a devolved powersharing government, voters are selecting the latest batch of 108 MLAs to represent them at Parliament Buildings. There are 276 candidates standing across 18 constituencies.

The sun was shining in most parts of the region as polls opened at 7am, with the weather set to remain fair for the rest of the day.

The Democratic Unionists and Sinn Féin are again likely to emerge as the two largest parties on their respective sides of the unionist/nationalist political divide after polls close at 10pm.

It would require a significant electoral turnaround for Sinn Féin to topple the DUP as the largest party and most pundits believe it highly unlikely.

Mr McGuinness has played down the importance of the job title, given both the First Minister and Deputy First Minister’s jobs wield the same authority.

A more significant target for Sinn Féin, which won 29 seats to the DUP’s 38 in 2011, might be the 30 seats that would hand it the strength to solely veto Assembly legislation with the use of the much-maligned “petition of concern” voting mechanism.

After a relatively low-key campaign, which has seen social and economic issues feature more prominently than in previous electoral races, the SDLP, Ulster Unionists and Alliance Party face an uphill battle to break the DUP/Sinn Féin grip on power at Stormont.

When all the seats have been filled and talks begin in Belfast to shape the next coalition executive’s programme for government, the smaller parties are set to face a choice between re-entering the administration as junior partners or taking up the newly established option of forming an official opposition.

The Traditional Unionist Voice (TUV), Green Party, Ukip, People Before Profit and the Progressive Unionist Party are among the smaller parties also vying for a place on the Assembly benches.

With such a muted campaign, all eyes will be on the turnout figure. The percentage of voters casting a ballot in Assembly elections has been in steady decline over the last two decades. It was 54.5 per cent in 2011.

A total of 1,380 ballot boxes have been placed at 619 polling stations across Northern Ireland.

The count for the 18 constituencies will be conducted through Friday and Saturday at eight centres across the region. The first results are expected on Friday afternoon with the final outcome not expected until 24 hours later.

‘Draconian’: TDs from across Midlands shocked and angered over lockdown 20:17
Workers diagnosed with Covid-19 or certified to self-isolate can claim special illness benefit 19:52
Main points: What restrictions have been imposed on Kildare, Offaly and Laois? 19:43
Warning of ‘economic meltdown’ in Kildare 19:28
Midlands lockdown: Movement restrictions in place for residents of Kildare, Laois and Offaly 19:22