No new Court of Appeal judges to be appointed over objections 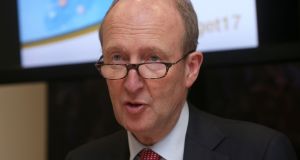 Independent Minister Shane Ross has told the Taoiseach he will not assent to the appointment of any more judges until new legislation governing judicial appointments is passed. Photograph: Laura Hutton/Collins Photo Agency

Senior members of the judiciary have asked for more judges to be appointed to the Court of Appeal to ease backlogs there, but no appointments are being considered by the Government because of objections by Independent Ministers.

The Irish Times understands both Chief Justice Susan Denham and president of the Court of Appeal Seán Ryan have raised the need for more judges with the Taoiseach, Enda Kenny, and have been in discussions with the Government for some time.

However, Independent Minister Shane Ross has told Mr Kenny he will not assent to the appointment of any more judges until new legislation governing judicial appointments is passed.

This week Minister for Justice Frances Fitzgerald told the Seanad a number of vacancies exist on the bench, and said there would “undoubtedly” be more arising.

“The requirements of the administration of justice will be the overriding priority for the Government over the period ahead as the necessary reforms are brought forward as expeditiously as practicable,” Ms Fitzgerald said.

Government sources said the position regarding judges had not changed and there were no plans for any imminent appointments, but that the situation was being kept under review. Independent sources remained adamant there will no more judges appointed until the new procedures are in place.

However, the legislation has yet to see the first stage – publication of the heads of the Bill, the general intention of each section – which is not scheduled until next month. Legal and political sources say it will not be passed until well into next year at the earliest, and some sources say that opposition to the Bill within the Department of Justice and the judiciary is likely to mean a much longer delay.

The lack of a Government majority in the Dáil means it cannot be certain the legislation would be passed.

Recently the Taoiseach told the Dáil the Government needed to appoint a small number of judges to the Court of Appeal immediately. However, a few hours later, a spokesman for Mr Kenny said there were no plans to appoint any new judges.

Ryanair to fly couple home after rejecting Covid-19 test results printed in Polish 12:10
Paid contracts for student nurses have ‘more disadvantages’, report for Cabinet finds 11:32
Scammers exploit Brexit taxes and charges for packages 11:20
Covid-19: First dose of vaccine given to 1.9% of people in State, Minister says 11:04
Empty shelves in the North are because of Covid, not Brexit, says Lewis 08:30