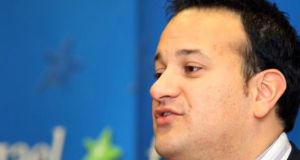 Minister for Transport Leo Varadkar: there was “nothing illegal, no wrongdoing, and I don’t think there is any case for somebody losing their job in those circumstances’’

The Government believed John Perry’s finances were under control when he was appointed Minister of State for Small Business after the 2011 election, according to an informed source .

“It would have been understood around the time of the election that matters were in hand,” the source said.

Taoiseach Enda Kenny has backed the Minister of State. There was no comment from Mr Kenny spokesman when asked whether Mr Perry had notified the Taoiseach of any tax or banking issues before his appointment.

“The issue of Minister Perry’s finances remains before the courts and, accordingly, the Taoiseach has nothing to add to what he has already stated on the matter,” the spokesman said.

Mr Perry’s spokeswoman offered no response to the same question.

“As the matter remains before the courts, Minister Perry will be making no comment.”

The Minister for Transport, Leo Varadkar, said that there was no threat to Mr Perry’s position.

While businesses and investments had gone wrong, Mr Varadkar said there was “nothing illegal, no wrongdoing, and I don’t think there is any case for somebody losing their job in those circumstances’’.