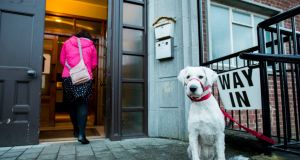 A dog waits outside as a voter goes into a polling station in Belfast South. Photograph: Liam McBurney/PA

The six outgoing MLAs in Belfast South are seeking re-election to Stormont and so, with all 18 constituencies reduced from six to five seats each, one of them must lose out.

Which is why, as it was last May, this will be a competitive slugfest to determine who wins the final seat and who must bid farewell to the Assembly.

The constituency has a sitting SDLP MP, Alasdair McDonnell, and comprises some of Belfast’s leafiest areas, such as Malone Park and the Malone Road and some working-class loyalist and nationalist areas such as Sandy Row and the Markets respectively.

South Belfast was the only constituency in last May’s Assembly elections to elect four women to Stormont.

All four are seeking re-election: Emma Pengelly for the DUP, Claire Hanna of the SDLP, Paula Bradshaw of Alliance and Clare Bailey of the Greens, who caused a surprise by winning a seat last year.

All are in with a good chance of being returned, although there is little doubt that the greatest pressure will be on Ms Bailey. She must view politics as a rather fickle and precarious business. It was only on January 16th, the week before Stormont was formally dissolved, that she made her maiden speech.

A feminist and advocate for the liberalisation of abortion law in Northern Ireland, Ms Bailey was elected on the last and 12th count with Christopher Stalford of the DUP. This time, the fifth and last seat could once again be a battle between Ms Bailey and Mr Stalford, who also was elected to Stormont for the first time last May.

He is a regular and combative speaker in the Assembly.

A fairly long-standing DUP Belfast councillor and one of the party’s backroom team, he knows he must harry and hustle for every first preference and transfer if he is to get back to Stormont.

Ms Pengelly is a barrister who served as special adviser to both Ian Paisley and Peter Robinson in the first minister’s office. She also served for a period as junior minister.

Last May she was close to 1,000 votes ahead of Mr Stalford, so of the two DUP candidates she appears to have the best chance of being returned.

Minister for Finance Máirtín Ó Muilleoir, who has featured prominently in the political jousting over the Renewable Heat Incentive scheme (RHI) that triggered this election, is the only Sinn Féin candidate.

Last time around the SDLP lost its second seat held by former UTV journalist Fearghal McKinney. Claire Hanna is one of the party’s most competent younger-generation politicians and should be safely returned.

She has a new running mate in Naomh Gallagher, an epidemiologist and long-standing SDLP activist. It seems a longshot that the party would win back its second seat, however.

Alliance also is running two candidates, Paula Bradshaw and new candidate Emmet McDonough-Brown. The party had close to the current quota last time around and Ms Bradshaw, as long as transfers go as anticipated, would expect to be re-elected.

Cllr Michael Henderson is standing for the Ulster Unionist Party, which used to be the dominant party in this constituency, but last May won only 6.7 per cent of the vote.

Parties such as People Before Profit, the Workers’ Party, Labour and the Northern Ireland Conservatives also are putting up candidates.

It seems a good prospect that three of the four women elected in May will be returned (Claire Hanna for the SDLP, Emma Pengelly for the DUP and Paula Bradshaw for Alliance ) and that Sinn Féin’s Máirtín Ó Muilleoir will join them, probably topping the poll.

Thereafter it is difficult to call.

If the varying shades of unionists voting here transfer to unionist candidates down the ballot papers, then Stalford could sneak it. But with the cash for ash allegations discombobulating so many unionists, perhaps the narrow advantage will lie with Clare Bailey and four women again will be returned.