New Bill provides for set up of independent policing authority 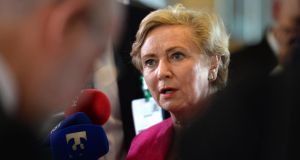 Frances Fitzgerald TD Minister for Justice and Equality received the approval this week for the heads of the Garda Síochána (Amendment) Bill 2014. Photograph: Dara Mac Dónaill / The Irish Times

The general scheme of a Bill providing for the establishment of the new independent policing authority has been published by Minister for Justice Frances Fitzgerald.

The Minister received the approval of the Cabinet this week for the heads of the Garda Síochána (Amendment) Bill 2014 which will pave the way for creation of the authority.

The Bill has 80 sections and will amount to a major piece of legislation.

“This is the most far-reaching reform of An Garda Síochána since the foundation of the State,” Ms Fitzgerald said today, “and is a major element of the comprehensive programme of justice reform which is being delivered by the Government.”

She expressed the hope that the authority would bring a further layer of public accountability to the administration of policing services.

“In particular, the new authority will be tasked with holding the Garda Commissioner to account in relation to all policing services while developing a key role in the future appointment of senior Garda management,” the Minister said.

The draft legislation has been developed taking into account the outcome of the public consultation process undertaken last May, the stakeholder consultation seminar hosted by the Minister in Farmleigh in June and the recommendations of the recent report of the Committee on Justice, Defence and Equality.

The heads of the Bill will now go to the Oireachtas committee for scrutiny in parallel with drafting of the full Bill by the Office of the Attorney General.

Ms Fitzgerald hopes to bring the Bill before the Oireachtas as soon as practicable.

Restaurants and bars could stay closed until the end of May, says Taoiseach 13:00
Holohan warns of up to 1,000 Covid-19 deaths in January, calls for tighter air travel rules 12:56
Covid-19 patients in hospital remain at high levels as lockdown extension expected 12:13
Everyone in Ireland to get Covid-19 vaccine by September, Minister for Health says 12:12
Inspector who highlighted mother and baby homes to be remembered through scholarship 11:07