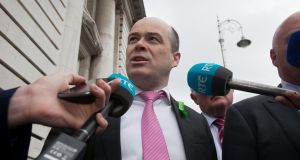 Minister for Communications Denis Naughten has championed the idea of linking child benefit to school attendance, and a clause reflecting his views was inserted in the programme for government agreed between Fine Gael and Independent TDs.

“We will reform the monitoring of child benefit payments by amalgamating the two existing school-attendance monitoring systems, currently run by the Department of Education and Tusla, to address poor attendance within some families,” it said.

Mr Naughten has previously called for the abolition of child benefit for school-going children, and said it should be replaced by a “school attendance payment”.

As an opposition TD in 2013, Mr Naughten said such a move would save the exchequer between €100 million and €135 million a year. He also said it would act as a fraud-prevention measure, address truancy in schools and would stop payments being made in respect of children who are not living in the State.

Speaking yesterday, Mr Naughten said the latest version of his proposal could be used to target welfare fraud.

“The situation at the moment is that every year the Department of Social Protection identify about €75 million in control savings in child benefit and that is money that is being paid out to children that either do not exist, are no longer resident in the country or are no longer entitled to child benefit,” Mr Naughten told RTÉ.

“This is not about cutting child benefit. A child is not entitled to child benefit unless they are receiving an appropriate education. That is strictly enforced from the age of 16 onwards, but it is not being linked-up for those under the age of 16.”

The Department of Social Protection issues about 300,000 letters annually to parents requesting confirmation that their children are resident in the State and are attending school.