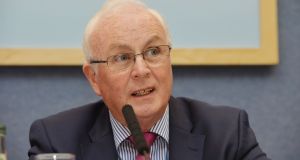 Nama chairman Frank Daly: “Our judgement then, and one that we stand over, was that the interests of Irish taxpayers took precedence.” Photograph: Alan Betson

The National Asset Management Agency (Nama) has claimed halting the sale of Project Eagle would have had serious costs and consequences for the Irish taxpayer.

In a statement to be delivered to the Public Accounts Committee today, chairman Frank Daly will strongly defend the agency’s sale of the Northern Ireland portfolio.

Mr Daly will confirm Nama knew in March 2014 that Frank Cushnahan, a Northern Ireland Advisory Committee (NIAC) member, was to benefit financially from the sale.

The chairman said halting the sale would have led to a number of risks, including reputational damage and potential risks to the exchequer.

Mr Daly says Mr Cushnahan’s position on the NIAC did not have any access to debtors or assets. “Mr Cushnahan may well have been an influential figure in Belfast. He may have sought to represent himself as a key pivot between debtors, investors and politicians.

“But he had no influence with Nama. And if he managed to persuade some people that he had an influence on Nama, they were blatantly misled. To some in Northern Ireland and perhaps to himself, Mr Cushnahan was a Nama insider; as far as Nama was concerned he was peripheral.”

Mr Cushnahan denies he was a party to any agreement to receive a success fee if the sale to Pimco went through.

A report by the C&AG has said the sale resulted in a loss of €220 million to the Irish taxpayer and said Nama diverted from its normal procedures in the sale.

Nama says the C&AG did not use external advice and did not have any “convincing, formidable and sufficient” evidence to support its findings.

In his evidence to be given to the committee today, C&AG Séamus McCarthy will say his team had the skills, knowledge, experience and expertise to carry out the review.