Mullen calls on Kenny to debate in same-sex marriage campaign 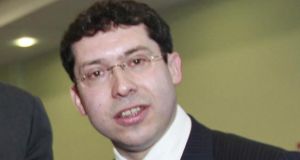 Senator Rónán Mullen: “The spin started with calling this the marriage equality referendum. That is designed to make people guilty as they go in to vote.” Photograph: Brenda Fitzsimons

Mr Mullen, who is campaigning for a No vote in the May 22nd poll, said the Taoiseach needed to come out and have a serious debate about the issues at the heart of the campaign.

He said the constitutional amendment could create a situation where a child would have no right to a mother.

“The Government is promising to legislate for surrogacy and that will be accessed by same-sex couples,” Mr Mullen said on RTÉ’s Today with Sean O’Rourke programme.

“The spin started with calling this the marriage equality referendum. That is designed to make people guilty as they go in to vote, to make them feel like they’re homophobes or anti-equality if they vote No. That is disrespectful.”

The Mothers and Fathers Matter group, which is campaigning for a No vote, has backed Mr Mullen’s calls for Taoiseach Enda Kenny to debate with the No side. In a statement, it said the Taoiseach was not trusted by his own colleagues to discuss the issues on live television.

“Someone in Government Buildings has decided that the leader of the country can’t be trusted to defend his own ideas when challenged.

“That the Taoiseach can’t be trusted by his own staff to defend these ideas should tell voters everything they need to know.”

A spokesman for the Taoiseach said there has been no requests from any media outlet for a debate on the upcoming referendum.