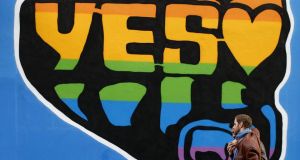 Campaigners are predicting more older gay and lesbian people will come out after the landslide victory in the same-sex marriage referendum.

Kieran Rose, Gay and Lesbian Equality Network, said thousands of people had grown up in an era where homosexuality was illegal.

He said they had confined themselves to a life in the closet, but knew now they would be accepted.

“There were so many personal stories throughout this campaign that made such a difference. Leo Varadkar, Pat Carey and Ursula Halligan have empowered people to declare who they are,” Mr Rose said.

“Many have felt isolated and have lived in the closet most of their lives. One of the fantastic things from this campaign was the message that came from 1.2 million people in this country who have indicated their support in the strongest possible way.”

A number of older people have been inspired by the actions of Mr Carey and journalist Ursula Halligan to reveal their sexuality to family and friends.

Campaigners now predict the personal stories and the public’s overwhelming reaction to them will inspire people.

“60 per cent of people have said we are in support of you and there is no reason to hide,” he said.

Brian Sheehan, Yes Equality, said the vote would now give people struggling with their sexual orientation the “confidence, courage and space” to reveal their true identity.

The 67-year-old said there was a large cohort of people who were content with staying in the closet, but will feel they can come out after the vote.

“There will be people who feel they can now come out. How large the number will be remains to be seen but I suppose they wouldn’t be huge,” Mr Carey said.

“We need to anticipate a demand now from LGBT people for social services to be provided for them in respectful way.”

Mr Carey joked there would have to be a group set up now for older people who are finally out.

A recent survey by the Gay and Lesbian Equality network discovered how uncomfortable older people feel at the prospect of coming out.

“Although the benefits of coming out were described by many as the freedom to express one’s sexual orientation and be faithful to one’s gender identity, the potential losses that could ensue seemed to slow the decision to come out,” it said.

“Participants continued to fear rejection, exclusion and discrimination. For those participants who were out, the process of coming out and disclosure of their LGBT identity had varying consequences, ranging from acceptance, denial, and invalidation to complete rejection.

“The most negative reactions to coming out came from participants’ families.”

Justin Moran, director of Advocacy at Age Action , said the charity runs a helpline for older people and will assist people looking for advice in any way it can.

He said the vote on Friday was a message to older gay people that you are no longer a gay Irish person; you are just an Irish person.

“We have an information line. If people want to get in touch with queries on services, entitlements or advice and help we will take those calls and direct them to bodies who specialise in those supports,” Mr Moran said.

Nuala O’Faolain, a feminist whose happiness was often tethered to men