Miriam Lord: Swings and roundabouts for Fine Gael as it seeks to tackle compo culture 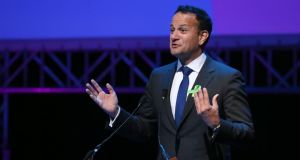 Taoiseach Leo Varadkar said the authorities “would welcome complaints by any residents in direct provision at Mosney or any other centre”. Photograph: Laura Hutton

Fianna Fáil missed a trick on Wednesday when the party’s transport spokesman published a Bill regulating the use of e-scooters.

In light of recent developments around the possible dangers involved in the carriage of adults on hanging seats, Robert Troy should have seized the opportunity to introduce omnibus legislation to also cover the use of swings, see-saws, slides and sandpits.

It would have been a welcome and most timely intervention.

The TD for Westmeath took to the plinth with his Road Traffic (Amendment) (Use of Electronic Scooters) Bill 2019. By his side was Lorraine Clifford, Fianna Fáil’s Seanad spokesperson on Justice, Children and Youth Affairs. Lorraine also has two toddlers running around at home, so she is very well up in the area of swings, see-saws, slides, sandpits and bouncy castles.

This is significant, as rumours were sweeping Leinster House that Fine Gael is set to impose a blanket ban on all Government backbenchers interacting with playground equipment of any type without the supervision of a responsible adult or senior member of Cabinet.

Already, morale in the parliamentary party is believed to be at a very low ebb after the Taoiseach, with a heavy heart, cancelled the bouncy castle booked by headquarters for Fine Gael’s next think-in. It’s always very popular.

It could be argued that the minor controversy over Maria Bailey’s court action against a Dublin hotel after she allegedly went head over heels off an indoor swing near the refreshment area one night is a welcome distraction for Leo Varadkar’s Government.

Jibes about one of his backbenchers taking a case over falling off a piece of play equipment may be embarrassing, but if they take the focus away from questions over the funding background to the multibillion-euro rural broadband deal and the cost of the new children’s hospital, not to mention the electorate’s unease about the housing situation, it might just be worth the mortification.

But as Ministers vow to take action on behalf of frustrated business people hit by what by they say is Ireland’s unfair insurance claims culture, news of Bailey’s wholly legitimate personal injury case has taken the shine off their much-trumpeted compo crusade.

But back to Robert Troy and his e-scooter related legislation. His party leader arrived on the plinth to lend moral support, but Micheál Martin was so keen to talk poor Robert only had a small amount of time to outline the reasons for his Bill before the boss took over.

There were a few words about the scooters, and then a further 20 minutes of words on his deep suspicions about the broadband contract, his impressions from the doorsteps, his fears about Brexit, his thoughts on Leo, his view on the elections and the strange story of Bailey and the Dean Hotel swing.

Micheál was asked if he agreed with Senator Michael McDowell, a former attorney general, who said in the Upper House on Tuesday that the action brought by Bailey, who was not a TD when the incident occurred, seems at odds with the Government’s stated intention to reform the personal injuries system.

“But who knows,” said McDowell, “maybe we are only hearing a portion of the evidence.” He added that he was not commenting on the merits of the case before the courts.

Martin stressed that he wasn’t familiar with “the specifics” of the claim and whether or not there were “some specific medical issues involved”. That being said, it seemed to him “to fly in the face of everything we are trying to do to bring insurance costs down”.

He went on to consider reports that the hotel, which is defending the case, alleges the then Cllr Bailey had not been holding on to the side ropes when on the swing because she had her hands full.

“You know, a swing with no handles. I don’t understand, I mean it is, it looks a bit, you know, em, anyway, look, I wouldn’t. . .” You could see he was struggling with the mental picture of that night in the Dean Hotel.

“I fell many a time as a young fella. I could never understand people claiming left, right and centre when you go through the ordinary things of life, if I’m honest about it. When we were young kids in the inner city of Cork, fellas broke ankles and hands and every bloody thing and sure we never thought of lodging a claim against anybody and I think there’s a limit to what people should be doing and I think this does impact on the claim culture.

“Who are they in Leinster House to be complaining against a claims culture if they are doing it themselves?”

The Fianna Fáil leader was upbeat about his party’s prospects in the elections pointing out that its eventual tally had previously been underestimated in the opinion polls by a wide margin.

He felt that Brendan Smith, who appeared on RTÉ’s election debate for the Midlands North-West constituency on Tuesday, had done very well. However, the talk in Leinster House was of the young Green Party candidate, Saoirse McHugh, who was refreshingly open and direct in her responses. She also softened the cough of Independent candidate Peter Casey with a couple of withering one liners.

The morning after her performance the bookies had slashed her odds from 50-1 to 16-1. We knew this because Green Party leader Eamon Ryan was telling everyone that he put a few euro on her a few weeks ago when she was unknown.

The Dáil rose at lunchtime for the week to facilitate the elections. The final contributor at Leaders’ Questions was Mick Wallace, who is in the hunt for a European Parliament seat in Ireland South. He was supposed to be the penultimate speaker, but the Rural Independent Group, which was down to ask the final question didn’t find anyone on the day.

With only two days to go to polling day, and a coveted Leaders’ Questions slot to himself, there was every possibility that Wallace would put up a grandstanding, headline-catching performance.

To his credit, he didn’t. Instead, he talked about vulnerable residents in direct provision who “are too afraid to complain about conditions for fear of marginalisation, rejection of their application or relocation by the management” in their accommodation. He called on the Government to investigate management practices at these centres and to tighten up on the inspections system.

The Taoiseach said the various authorities “would welcome complaints by any residents in direct provision at Mosney or any other centre and any complaint would certainly not affect a person’s application, either adversely or favourably”.