Tension for Labour, old dreams for Fine Gael and a sweet tweet from Lynn Boylan 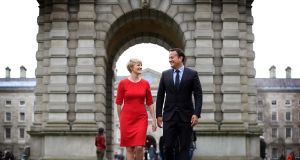 A - When he or she is a member of Fine Gael.

Businessman and entrepreneur Seán Melly, who is running for a Seanad university seat, is far from happy with this state of affairs. Melly, among many things, is chairman of the Trinity Business School and is contesting the election as an Independent candidate. He hit out this week at Fine Gael for asking its members to vote for “so-called independent candidates” who are either members or strongly affiliated to the party.

Melly is “surprised and disappointed” that Fine Gael, or any other party, would attempt to politicise the university panels, which have “a long tradition of independence”.

How can Independent candidates be active members, receiving party support?

The letter goes on to list three candidates on the NUI panel and one on the Trinity panel. Only one is running under the Fine Gael banner – Cllr Pearce Flannery (NUI). The others are running as Independents, but are described in the letter as “Fine Gael activist” (John Higgins), “Fine Gael member” (Deirdre Burke) and “Fine Gael affiliated” (Prof Anthony Staines. )

Staines, who was elected treasurer of his local FG branch last year, says on his website that while he is a party member, he will not accept the party whip if elected.

Melly, who is an independent Independent, is deeply unimpressed. “Candidates need to be honest and political parties should not compromise the integrity of the Seanad,” he says. “The independence of the Upper House must be maintained and its original function rescued and preserved.”

Leo Varadkar, meanwhile, bucked the instructions in the Fine Gael letter and has publicly signalled his support for Averil Power, who is standing for the Trinity panel.

Power was behind a strange email sent to all Senators yesterday by the Oireachtas Communications Unit. It read: “Dear Senator, you may have received an email inviting you to the Late Late Show tonight, Friday, 1st April, for a discussion on Seanad abolition. RTÉ has confirmed that this invite does not come from the Late Late Show and is an April Fool’s Day spoof and to ignore it.” The invite, purporting to come from a Late Late Show researcher, began: “I sincerely apologise for the short notice. We write to you as a Seanad candidate and have had a last minute change of schedule. The acting Taoiseach, Enda Kenny, will be a special guest on the Late Late tonight.”

As the Taoiseach tried to abolish the Seanad, the show wanted “selected” Seanad candidates to give their views. They were asked to confirm their attendance and be at reception in television centre at half eight “for a pre-show discussion and briefing in the green room.”

The carry-on between the two main party leaders this week is reminiscent of Donald Trump’s childish “I didn’t start it!” excuse for having a go at an opponent.

Still, we must mention the Labour Party’s meeting in a Dublin hotel and its attempt to clear the air after a disastrous showing in the general election. Survivors and defeated deputies attended.

Star of the show was one of the last TDs left standing: Seán Sherlock, of Cork East, who is now in the running for the leadership. In the highly charged atmosphere, harsh words were exchanged with leader Joan Burton. Seán decided to make a big exit.

“I can’t listen to any more of this s**t, Joan!” he bellowed, before sweeping from the room in theatrical fashion.

Unfortunately, the effect was ruined when he had to tiptoe back in to get his coat.

Meanwhile, a pleasing byproduct of having no new government in place was the absence of worthies banging on about the 1916 commemoration and how honoured they felt to have played a role in engineering such a triumph.

After a successful ceremony on Easter Sunday, the traditional welter of self-congratulation was not possible.

But things could have been so different had the election gone another way. In recent years, Enda Kenny and Michael Noonan have joked about what they might do at the centenary celebrations.

Here’s what Noonan said at a dinner in New York in February 2014: “We’re going to get de Valera’s old Rolls Royce out of mothballs. We are going to drive it to the GPO. I will let the Taoiseach out and he’ll go up on the platform to take the salute and I’ll back it up and park it on Abbey Street, and then we’ll go to the country and say: ‘We want you to renew our mandate!’”

A couple of years earlier, Enda spoke of a similar dream. It had a different ending. In the Taoiseach’s imagination, he would step out of the old Rolls Royce and declare to cheering crowds: “All is well, Collins sent me!”

Happy days back then for Fine Gael. But now we hear that the Government Information Service (GIS) was phoning press officers yesterday with an important update on describing Ministers in press statements. They are not to be called “acting Minister” but “Minister”. We would love to know who sent that instruction to put-upon GIS officials. It looks like somebody hasn’t come to terms with the election result.

Boylan declines to gild the lily

The most entertaining tweet of Easter week was sent by Sinn Féin MEP Lynn Boylan on Sunday night.

“Why did State opt for daffodils & not lilies today? Another case of #Easter1916 #revisionism?” Lynn attached a photograph of the offending revisionist daffs arranged around one of the GPO’s columns.

Unfortunately for the MEP, she could not see the display of white Easter lilies under the portico because she was seated with the big-wigs on the main reviewing stand next to the GPO, facing in the opposite direction.

Later in the week, she was asked by journalists about the tweet and ensuing criticism. (The Irish Independent, in particular, took a very dim view.)

“I’m wearing my lily with pride,” Lynn declared, dismissing the episode as “an absolute non-story”.

When the man from the Indo suggested her tweet was “ludicrous,” she retorted, “Am I not permitted to ask a question anymore?”

“To be fair, that question was asked by a huge number of people to me as well. They asked why the lily – which is so synonymous with 1916 – why there weren’t lilies . . . ”

No point in gilding the lily.

Sinn Féin did that on Easter Sunday with their own centenary march, which clashed with the State’s parade and meant Mary Lou McDonald had to leave the GPO reviewing platform early so she could make it.