Miriam Lord’s Week: Wincing from a wallop in the ballots 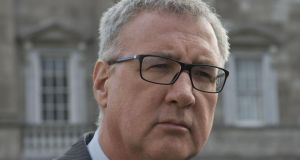 This week, Prof John Crown advises on the best course of action to follow if you suffer a nasty wallop to the ballots area.

It’s nearly two years now since the Seanad referendum distraction, when the country, out of pure badness, decided not to do away with the Upper Chamber.

“Sometimes in politics, you get a wallop in the electoral process,” said Enda after the result.

The reform of the Seanad had one of its regular airings on Wednesday when the report of the working group into the issue was discussed by Senators. Such is their interest in themselves, the Senators managed a fine turnout for the session, by their standards.

“The compulsive interest of members of the House in this matter has led to a situation where there are 11 members present – I counted them some minutes ago – and that has been about the average throughout the afternoon,” noted David Norris.

But back to Prof Crown, who is worried about Enda’s approach to reforming the Seanad. He may be suffering from post-wallop syndrome.

“In many ways, I’m a great admirer of Taoiseach Kenny and I’ve stated before that I believe he is the best Taoiseach we’ve had for a long time, although it must be said the competition for that particular accolade has been somewhat weak.

“But I think he has played this one exactly wrong at every step along the way.

“As a doctor, the prescription I would offer someone who had a wallop would be one of three . . . You can either deal with the disagreement that caused the wallop, you can wallop the person back, or you can put something very cold over the walloped area to make it go away.

“And it’s very hard to escape the conclusion that that is what our Taoiseach has done on this occasion – he’s tried to put a great big cold compress over the wallop and the wound (which is the deficiencies in our parliamentary system of government) and I think he is taking the wrong option.”

But, having ignored the symptoms for a long time, it seems Enda finally gave in to his post-wallop twinges and tried to address them.

Perhaps he heard Prof Crown and decided to take action. To this end, he invited party leaders to meet him in Government Buildings that very evening.

The Taoiseach, or his representatives, didn’t think to invite, or inform, Maurice Cummins, Fine Gael leader of the House, about the meeting.

On Wednesday morning, before the debate on the working group’s report, he told the Seanad that Enda hadn’t been in touch about “bringing the various groups together, but he did indicate to me last week in a brief conversation that he intended to set up an implementation body in early course to deal with the Seanad reform proposals”.

Glad to be of help

Whereupon Darragh O’Brien, his Fianna Fáil counterpart, intervened. “May I be helpful on one matter? I don’t mean to interrupt but . . .”

He pointed out to Cummins (who was not best pleased) that the Taoiseach would be meeting Fianna Fáil later in the day to discuss the issue.

It didn’t go well as far as the party leaders were concerned, particularly when told the Government had yet to take a view on the recommendations in Maurice Manning and Joe O’Toole’s report.

“A full 18 months following our last meeting on the issue, the Taoiseach arrived at last night’s meeting with no real plan on what to do about reforming the Seanad. Instead, it quickly became clear that what we were involved in was a straightforward box ticking exercise,” said Micheál Martin.

Gerry Adams declared he had heard nothing to persuade him Kenny’s “cynical attitude to political reform” had changed.

Not what the doctor ordered.