Miriam Lord: Non-invasive procedure can get your credentials up to scratch 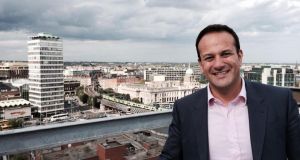 Minister for Health Leo Varadkar: taking in view from Hawkins House penthouse, though he’s not planning to leave Dublin 15.

Important Health Notice. When is the last time you checked your credentials? It is vital to do this on a regular basis, looking out for warning signs of self-importance which might lead to notions.

If they are left unchecked, you could lose your chance to sit on a State board. Or worse still, fail to get into the Seanad.

If you are concerned about the state of your credentials, go and see your local TD who will refer you to a specialist, such as the Minister for Arts, Heather Humphreys (though she is hard to track down and of a very nervous disposition).

There is nothing to be ashamed or embarrassed about. Ministers check credentials all the time and you could be surprised: some crony’s credentials might be even worse than yours!

In fact, there are many cases of people who have hardly any credentials at all and they have been able to live normal lives on State boards with the help of a Government Minister. You would be amazed what these experts can do for members.

Again, while this is understandable, Ministers can – and frequently do – operate on the most hopeless set of credentials. Never fear, you’ll have your feet under the boardroom table in no time! Nobody need ever know. Discretion is assured. Your considerate friends in Labour will turn a blind eye while your consulting Minister and attending Taoiseach won’t tell a soul.

There might be occasional cases of “flare-up”, which can be exacerbated by prolonged exposure to Micheál Martin, Gerry Adams and the media.

In this event, the Taoiseach will personally conduct a course of round-the-clock incoherence therapy, with blanket use of Simon Harris and Regina Doherty thereafter, followed by a parliamentary party meeting.

This should “kill” the flare-up, allowing most patients to “move on and concentrate on the economy”.

Sting in the tail

Becoming Minister for Health is bad enough, but discovering you’ll have to work in Hawkins House is the real sting in the tail.

The headquarters of the Department of Health is based in one of the sickest buildings in the country. The only thing it has going for it is its proximity to some of Dublin’s finest pubs.

But spirits were buoyed recently in the ramshackle office block on Hawkins Street with news that the OPW was going to be carrying out a big renovation. They did a great job. But unfortunately, they only did up the car park.

Leo Varadkar decided to do a tour of the place once he settled in. The upper levels of the building have been unoccupied for some time because working conditions are so bad.

Apparently, it’s unbearably hot in the summer months, impossible to heat in the winter and bits keep falling off the fixtures and fittings.

‘I thought of The Shining’ The Minister, accompanied by OPW sherpas, made his way towards the top of the building and was surprised to discover a penthouse flat on the summit.

“It was like something out of a horror movie – I thought of The Shining. The small apartment hadn’t been used since the 1970s and it was in a very bad state.

“There was this lurid floral wallpaper on the walls, a dirty avocado toilet suite and some old empty whiskey bottles scattered about. There was just the one bedroom. I’ve no idea who, if anyone, lived in it,” he says. But there was more.

The Department of Health’s penthouse opens onto a large veranda with panoramic views of the city and the river Liffey. It’s currently the preserve of seagulls and the ground was strewn with bleached chicken bones. However Leo, once he fought off the vicious seagulls, was blown away by the scenery.

“If we did this up it would be the ultimate city pad for a discerning tenant. We could command a very high rent,” he mused. “I could use it to fill some of the hole in my Health budget.”

And no, he says he won’t be moving in. He’ll stick with his apartment in Dublin 15.

Meanwhile, his predecessor in Health, James Reilly, has been out and about canvassing in his Dublin North constituency. We hear constituents have been startled by the sight of Bottler barrelling up their driveways with a bunch of leaflets and a big smile.

Is the Fine Gael deputy leader and Minister for Children expecting something?

This time next week we should know the result of the Seanad byelection.

Now. Here’s the thing (as Mary Lou might say.) If John McNulty wins the seat vacated by Deirdre Clune after she won a seat in Europe, does this make him the first person to be elected to the Oireachtas after requesting the electorate not vote for him? Will he take his seat? Or resign, precipitating a fresh election?

Yesterday, the odds were shortening on him pulling off a remarkable victory. The Donegal convenience store unknown, whose highly impressive credentials include a stint on the prestigious board of the Irish Museum of Modern Art and stuff, seems to have a lot of support in Leinster House. Dropping Heather in it And seeing as Enda Kenny applauded McNulty’s “decision” to withdraw from the election, taking responsibility for the situation which forced the candidate to take such a course, will he abstain from voting now? After all his high-minded talk in the Dáil this week, what will the Taoiseach do if John McNulty triumphs?

So many questions. He’ll probably brazen it out. Not that anyone really cares at this stage. There’s a budget around the corner.

But when the dust settles, spare a thought for Heather Humphreys – new in the job and dropped into a crisis by the Taoiseach, clearly out of her depth. And there was her brave leader Enda, at all times gallantly by her side, battling for himself.