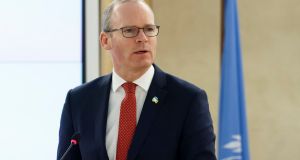 Minister for Foreign Affairs Simon Coveney: one of a number of speakers in the debate who fervently hoped the new Bill would never see the light of day. Photograph: Salvatore Di Nolfi/EPA

The Brexit Apocalypse Bill, a belching omnibus of a vehicle, reversed into Dáil Éireann at teatime on Tuesday, polluting the chamber with rancid fumes which nobody requested and nobody wanted.

“Unprecedented,” everyone agreed, wrinkling their noses. “We didn’t want this. We didn’t ask for it. But we are where we are.”

It’s a pity the situation was so grave, because it isn’t every day TDs can say “we are where we are” without having to apologise profusely for bringing us there. That’s unprecedented.

The Apocalypse Bill has been the best part of three years in the making, ever since the UK public voted to cut ties with the European Union and drift up Brit Creek without a paddle. Which would be fine, except there is every possibility they will drag Ireland under too if the whole daft enterprise goes belly-up on March 29th.

Hence the scramble in the Oireachtas to put mitigating measures in place in the event of a “disorderly” Brexit. But hope springs eternal, and when the Minister for Foreign Affairs was introducing the legislation he expressed the wistful hope that this law would never do any more “than sit on the shelf of my office”.

Simon Coveney was one of a number of speakers in the debate who fervently hoped the new Bill would never see the light of day. In the meantime, preparations must be made in case the UK crashes out with no deal, even if there was a glimmer of optimism among deputies that this might not happen.

For table quiz aficionados, here is the law which will be enacted in a couple of weeks time: the Withdrawal of the United Kingdom from the European Union (Consequential Provisions) Bill 2019.

With any luck, we won’t have to provide for too many consequences.

Independent TD Maureen O’Sullivan worried that the Bill looked like a bit of “a rush job” and she hoped it wouldn’t “come back to haunt us”. But she prefers to look on the bright side.

“New vistas are appearing daily,” the Dublin Central TD said brightly, which was a nice way of saying you wouldn’t know what those MPs might do next, given that Westminster is now overrun by headless chickens, some of whom haven’t even attended a public school. The final outcome may not all be “doom and gloom”, predicted Maureen, with a wan smile.

“I’m nervous,” quivered Eamon Ryan, hoping for the best but fearing the worst. The Green Party leader had been following events in London and, while it looked like the dreaded prospect of a no-deal scenario was receding, “the risk is they won’t even manage that process of avoidance”.

Around 22 years have been set aside for the debate, sorry, 22 hours. It just feels like that

Brendan Howlin was fretting. This omnibus Brexit Apocalypse Bill is “a monumental piece of legislation”, he declared, hefting the document aloft with a dramatic flourish, an action which wasn’t rewarded with an awestruck “ooooh” from deputies because there was barely a handful of them in the chamber for this unprecedented occasion.

Monumental Bill presented diminutive Brendan with an enormous problem. The urgent need to pass Coveney’s Consequential Provisions into law as soon as possible left the Labour party leader with “a mere weekend to read it”. The same goes for his legal people who will have to scrutinise it too.

The Dáil will sit close to midnight for three nights this week and the same schedule is likely for next week. Around 22 years have been set aside for the debate, sorry, 22 hours. It just feels like that as the rota of second-string deputies creaked into a kind of action, sloping into the chamber with their supplied scripts to fill the gaps between contributions from the senior hurlers.

It tells us that “This single omnibus bill is made up of 15 parts relating to matters within the remits of nine Ministers. It is focused on measures protecting our citizens and supporting the economy, enterprise and jobs, particularly in key economic sectors. Each part will be commenced by the individual Minister at the appropriate time.”

Most parts are fairly brief and deal with areas such as health services, immigration, transport, student services and social welfare provisions. Part 6 is the only one which comes with chapters – seven of them in all. Which can only mean one thing: tax.

When you strip out the table of contents and procedural padding, the actual Bill runs to 63 pages, with a third of them devoted to tax provisions.

There will, of course, be a meaningful vote at the conclusion. It will be a proper meaningful vote, unlike the ludicrous capers across the water in Westminster. The Bill will be endorsed by all sides of the Dáil, sending a strong message to the UK government and those members of parliament who don’t choose to wilfully ignore it or knowingly misinterpret it.

“The time for stalling is over,” was Mary Lou McDonald’s message for the British. Sinn Féin is also supporting the Bill, which will be “ready as required, but hopefully never needed”.

In the national interest, Fianna Fáil will also be rowing in behind Coveney’s Consequential Provisions

“The movers and shakers in this crisis have no interest in the lives of ordinary people,” said Bríd Smith of People Before Profit, while not blaming the Government for introducing what amounts to emergency law.

She dismissed Brexit as the product of “a decaying British empire on which the sun doesn’t even rise anymore” while adding that it’s acceptable to question the European Union while being against a hard Brexit.

In the national interest, Fianna Fáil will also be rowing in behind Coveney’s Consequential Provisions, even if Brexit spokeswoman Lisa Chambers echoed Brendan Howlin’s complaint that the Bill was delivered far too late for adequate consideration. It was only published last Friday and four days later it was before the Dáil for debate. This was “wholly inadequate and simply unnecessary”.

Her colleague Seán Haughey, who wasn’t one of the supplied script brigade and spoke from notes on an A4 ring binder page, was similarly lukewarm in his acceptance of the measures.

“This legislation is not the be-all and end-all,” he loftily informed the Government.

If possible, Tánaiste Simon Coveney sounded more low-key than he usually is when moving the legislation. He spoke of the “overall sadness Ireland feels at the UK’s decision to leave the European Union”, but the country has to get on with preparing for consequences of a withdrawal.

But there will be better days, he soothed.

“There will come a time – and I promise you all this – when the word ‘Brexit’ will no longer dominate the lens through which the British/Irish relationship is viewed.”

But for now, he regrets the Brexit apocalypse is a “lose, lose, lose” situation for all involved.

Unless the UK wakes up and ditches that pernicious old Thatcher line of “out, out, out”.