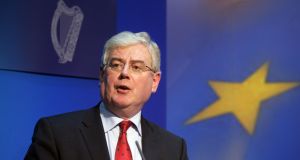 Minister for Finance Michael Noonan will in effect be left in charge of the State when Taoiseach Enda Kenny and other Government Ministers travel abroad to mark St Patrick’s Day.

Mr Noonan will be the most senior Government Minister to remain at home when Mr Kenny departs for Washington, New York, Seattle and Silicon Valley and Tánaiste and Minister for Foreign Affairs Eamon Gilmore visits Atlanta, New Orleans and Washington.

Minister for the Environment Phil Hogan ’s destination is Boston, while Minister for Social Protection Joan Burton will travel to Chicago, where she will hold a meeting at the Federal Reserve Bank.

China is Minister for Education Ruairí Quinn’s destination while Minister for Children Frances Fitzgerald is set for India.

Minister for Transport Leo Varadkar is going to Japan.

Some Ministers have already left the jurisdiction, with Minister for Justice Alan Shatter travelling to the Middle East. Minister for Communications Pat Rabbitte is due to travel to New York.

Marketing opportunity
“Essentially, and I think there’s a kind of understanding amongst the greater public as well, the idea that you wouldn’t take advantage of the sort of marketing opportunity that is Paddy’s Day is gone,” he said.

He said the destinations would be announced today when the Enterprise Ireland programme of trade missions and international activity for 2013 was outlined at an event in Sandyford, Dublin. Mr Gilmore and Minister for Jobs Richard Bruton will launch details of the Government’s St Patrick’s Day “Promote Ireland” programme

The Government insists that St Patrick’s Day provides valuable opportunities to persuade business personnel in other countries to invest in Ireland’s economic recovery.

Ministers are instructed to include as many business, trade, tourism and investment opportunities as possible in their trips.

The highlight of Mr Kenny’s visit will be the presentation of shamrock to US president Barack Obama on March 19th.