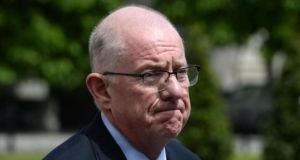 Minister for Foreign Affairs Charlie Flanagan has said: ‘We’re six months from the Brexit referendum. We need some clarity as to what the plan is.’ Photograph: Dara Mac Dónaill

The Government has called on Downing Street to clarify its intentions on Brexit, publicly criticising for the first time the refusal by the British government to outline its objective in the Brexit negotiations.

“The mixed messaging from the UK is a matter of concern,” Minister for Foreign Affairs Charlie Flanagan said.

“We’re six months from the referendum. We need some clarity as to what the plan is.”

In an interview with The Irish Times, Mr Flanagan said that the mixed messages from the British government were leading to “uncertainty” which was damaging to markets and to business.

Frustration is growing in Dublin at the British government’s failure to say what sort of Brexit it will seek.

Mr Flanagan on three occasions repeated his call on the British government to tell other EU countries what their intention is.

Later, he added: “I want to see a plan. After six months we should be moving now from slogans towards having a clarified plan. I don’t see evidence of that, and I find that regrettable.”

The British prime minister, Theresa May, has said that “Brexit means Brexit”, but neither she nor her ministers have indicated whether Britain wants to remain a member of the EU single market, of the EU’s customs union, or if it wants a complete break with the bloc, a development which would have significant consequences for the North and the Border with the Republic.

In the absence of any replacement agreement, leaving the EU’s customs union would require Ireland to impose a tariff on goods entering from the North and the rest of the UK, with Irish goods seeing a tariff imposed when they enter the UK.

The implications for the common travel area between Ireland and the UK, which allows an open and invisible border between North and South, are also unknown until the British objectives become clear.

“In the event of the UK leaving the single market, my hope would be that they remain in the customs union,” Mr Flanagan said.

In these circumstances, he said, the “invisible border” between North and South could be maintained.

Mr Flanagan said that comments by the British international trade minister Liam Fox at the weekend, in which he raised the prospect of the UK remaining a member of the customs union, were “the polar opposite of what he said in September”.

On Wednesday, Taoiseach Enda Kenny said that Ms May is scheduled to visit Dublin in the new year.

Flagging Government concerns about the British intention to withdraw from the European Convention of Human Rights, Mr Flanagan described the Belfast agreement as an “internationally recognised legal instrument . . . no aspect of which is negotiable”.

“The letter and spirit of the Good Friday agreement must in all circumstances be fully acknowledged preserved and maintained.”

The repeal of the Human Rights Act as promised by the British government, Mr Flanagan said, “will have immediate consequences on the Good Friday agreement and the human rights section thereof”.

Mr Flanagan said he had stressed “the fragile nature of the peace in Northern Ireland” to his UK colleagues.