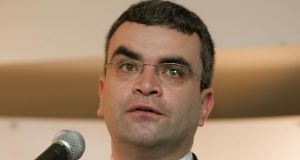 Mayo TD Dara Calleary said some 3,000 members are expected to attend the RDS in Dublin for the Fianna Fáil ard fheis this weekend.

Increasing the minimum wage and boosting the number of gardaí are among the resolutions going before the Fianna Fáil ard fheis later this week.

Launching the programme on Wednesday, Mayo TD Dara Calleary said some 3,000 members are expected to attend the RDS in Dublin for the event, which takes place on Friday and Saturday.

An increase in the Garda force “to make our communities safe again” is one proposal being put to the ard fheis by a Dublin cumann, while a Galway cumman is calling for the minimum wage to be increase “by at least six per cent”.

A five per cent levy on all alcoholic drinks served after midnight is proposed by one local party organisation, along with free travel for all under-25s who are unemployed.

A number of motions relate to Irish Water and these include calls for the organisation’s abolition.

Childcare reforms are also proposed, with a call for maternity leave to be extended and no longer taxed.

An Offaly-based cumann is calling for the Universal Social Charge to be reformed and then abolished, while a Meath West organisation says USC, PAYE and PRSI should be replaced with one tax.

On coalition options, two Dublin organisations say the party should publicly commit not to go into Government with Fine Gael after the next General Election.