Upbeat Minister says one in three Irish people get cancer: “It’s another thing that happens” 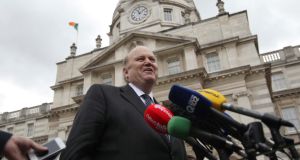 Minister for Finance Michael Noonan has revealed he discovered what turned out to be a cancerous lump on his shoulder while taking a shower one morning in February. Photograph: Stephen Collins/Collins Photos

Minister for Finance Michael Noonan has revealed he discovered what turned out to be a cancerous lump on his shoulder while taking a shower one morning in February.

Describing his experience in detail yesterday, Mr Noonan said it was something that happened to a lot of people.

“You’re showering in the morning and suddenly your fingers run over something and you think, ‘Jesus, there’s a lump there, I better get it checked’.”

He said he let a number of days pass – “10 days” – before having the growth examined. The lump was identified as a sarcoma that needed to be removed.

Mr Noonan indicated that he was not particularly shocked by the diagnosis, given the knowledge he had gained during his time as minister for health.

“One in every three people in Ireland unfortunately get cancer some time in their lifetime. So it’s, you know, it’s another thing that happens one.”

In terms of spreading the information, he said he had “kept the circle quite tight”, telling only his immediate family and a few close political colleagues.

Taoiseach Enda Kenny was informed the day after the diagnosis but the pair did not have “lengthy discussions”. Mr Noonan kept Mr Kenny up to date “with a sentence here and a sentence there”, informing the Taoiseach when he was going into hospital, for example.

The Minister received five weeks’ radiotherapy at St Luke’s Hospital, Dublin, to shrink the sarcoma during March and April, and it was removed last Wednesday at Cappagh Hospital in Dublin. He was discharged last Sunday.

In a statement released on Tuesday night, Mr Noonan said his medical team believed the treatment had gone well and was “upbeat about the prognosis”. He also said there was no damage to his shoulder muscle and “my risk of recurrence is low”.

Yesterday morning, speaking to reporters at Government Buildings, he confirmed he had a wound on his right shoulder and was on painkillers.

But he was upbeat about what he had gone through and said he was “very confident” he could continue with his job. “I’ve another budget I need to bring in and another one after that,” he said.

Asked if his medical team had told him to take it easy, Mr Noonan joked: “Ah yeah, sure doctors always tell you take it easy. I’m taking it easy, talking to all of you here!”

He confirmed he had already started preparations for the budget on October 14th and had had a number of conversations about the matter with Minister for Public Expenditure and Reform Brendan Howlin.

Key officials had been asked to take their holidays in July so they could begin work in August, he said.

A private figure, Mr Noonan has rarely spoken about personal matters. He was Fine Gael leader during the party’s disastrous 2002 general election campaign. Unknown to anyone beyond his closest circle, his late wife Florence (Flor) was experiencing early-onset Alzheimer’s at that time. He spoke movingly about the impact of the progressive condition on his family in 2010. Mrs Noonan died in February 2012.

Mr Noonan paid tribute to his predecessor as minister for finance Brian Lenihan at the conclusion of his first budget speech. He said Mr Lenihan, who died from pancreatic cancer in June 2011, had “a most difficult task which he fulfilled with great courage and dignity”.

Mr Noonan yesterday said it was his intention at the moment to stand again for election in Limerick, although he stressed he believed the next general election would not take place until 2016.