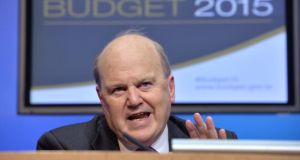 Michael Noonan: said he would be broadly supportive of the idea of a conference which could provide a forum to discuss the debt burden on Greece. Photograph: Alan Betson

Minister for Finance Michael Noonan has expressed broad support for the prospect of a European debt conference following the forthcoming general election in Greece.

Government sources suggested last night that any European conference could consider not only the Greek debt but the Irish, Spanish and Portuguese debt as part of a new approach to remaining problems facing the European Union bailout states.

The Minister told a gathering of Irish ambassadors and top civil servants in Dublin he would not be dismissive of the idea of Greek debt being discussed at such a conference.

Responding to a question from his audience, Mr Noonan said he would be broadly supportive of the idea of a conference which could provide a forum to discuss the debt burden on Greece.

The party’s leader, Alexis Tsipras, has called for a “European debt conference” based on the 1953 London conference that wrote off half of postwar Germany’s debt and extended the repayment period for the remainder.

That conference, along with the US Marshall plan, which funnelled $16 billion ($160 billion at today’s value) into Germany for four years after 1948, is widely regarded as key in enabling Germany’s post-war economic miracle.

He gave an overview of the economy but TDs present said it was significant that he spoke of how the Government was aiming to improve society as well as the economy, which was a theme of the meeting. An example would be focussing on people in negative equity, he said.

Taoiseach Enda Kenny said Government departments will be asked to provide updates on progress made in preparation for the spring financial statement, which is expected to take place in April.

Speaking to journalists in advance of the Dáil session, Fianna Fáil leader Micheál Martin accused the Government of making irresponsible future “commitments” totalling €3.5 billion despite having delivered a budget just three months ago.

He said there had been a litany of leaks from Government sources in recent weeks about new policy initiatives and future commitments that would run into billions of euro.

“The budget was only announced three months ago, we’re only two weeks into the year and the Government is briefing spending initiatives left, right and centre in an attempt to set a scene for the election campaign. There is clear unease and division between Fine Gael and Labour and this is likely to increase in the weeks and months ahead,” he said.

Fianna Fáil would continue to set out its clear policy platform through 2015 alongside the selection of candidates for the forthcoming general election, he added.

“We will not be making promises we cannot keep. The people need clear and realistic choices placed before them at the next election and this will be a priority for us while we continue to hold this dysfunctional Government to account in the Dáil,” he said.

After a meeting of his parliamentary party, Sinn Féin leader Gerry Adams said the Coalition was on its last legs.